Inter stun Milan to go top of Serie A 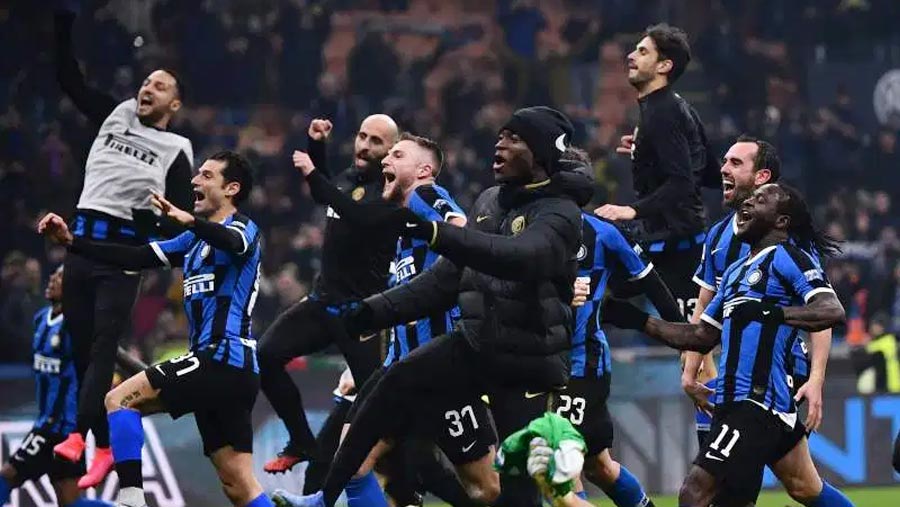 Inter Milan moved top of Serie A on Sunday (Feb 9) after storming back from two goals down to snatch a 4-2 win over AC Milan in a pulsating derby at the San Siro. Inter pull level on 54 points with Juventus, who lost 2-1 at Hellas Verona on Saturday, but are ahead of the champions on goal difference thanks to a exhilerating second half turnaround after Ante Rebic and Zlatan Ibrahimovic had put Milan 2-0 up at the break. Lazio are just a point behind in third after Felipe Caicedo scored the only goal in a hard-fought win at Parma earlier on Sunday.

Inter Milan launched a superb second-half comeback from 2-0 down to stun rivals AC Milan and go top of Serie A.

Inter started in third but leapfrogged Lazio and head the table on goal difference from champions Juventus.

Ante Rebic tapped home from Zlatan Ibrahimovic's knockdown and the Swede headed in the second before the break.

Antonio Conte's side looked beaten at half-time after a lethargic opening 45 minutes, but responded in sensational fashion in the second period with four unanswered goals.

Both sides hit the woodwork in a thrilling derby, Hakan Calhanoglu smashing the post with a low drive and Ibrahimovic heading against the post late on, while Inter's January signing Christian Eriksen rattled the crossbar with a long-range free-kick.

Milan had been in good form under coach Stefano Pioli, losing just one of their previous 11 league games under the former Inter boss, but their second-half capitulation keeps them in 10th place.

Inter are now unbeaten in 16 league games and host Napoli on Wednesday, before a crucial clash against fellow title challengers Lazio next Sunday.

Earlier on Sunday, Simone Inzaghi's Napoli side showed their credentials by extending their unbeaten run to 18 games with a narrow 1-0 win at Parma - striker Felipe Caicedo scoring the winner.