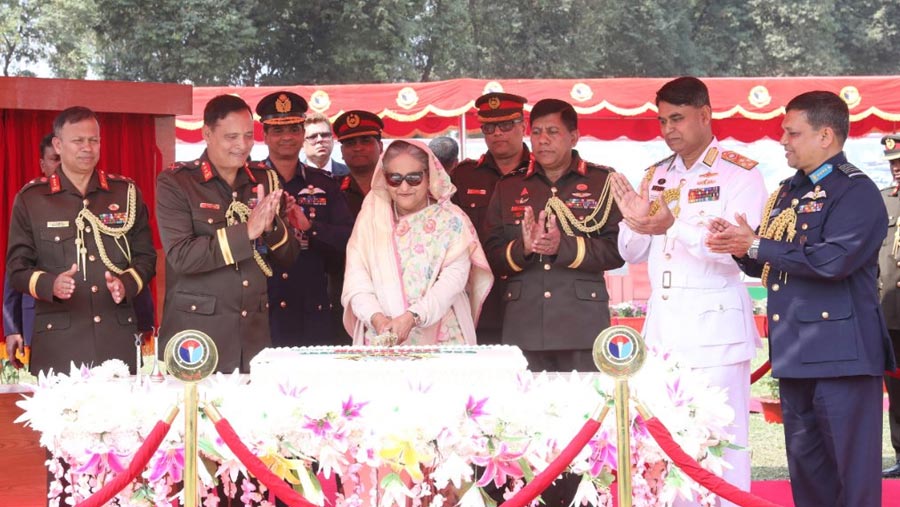 Prime Minister Sheikh Hasina on Sunday (Feb 9) asked the armed forces to enforce a vigil against some existing social menaces alongside their routine duties, saying her government would continue to follow “zero tolerance” policy to eliminate the curses.

“There are some social menaces like narcotics, terrorism, militancy and corruption . . . I am drawing your special attention to these,” she told an armed forces graduation ceremony in the capital, local media reported.

The premier added: “We have already announced the ‘zero tolerance policy’ against terrorism, militancy, narcotics and corruption, the ongoing drives against the menaces will be continued.”

Sheikh Hasina said elimination of these menaces was a must to protect society as “we do not want to allow them to destroy our children’s lives”.

Defence Services Command and Staff College (DSCSC) staged the ceremony to confer on the graduation degree to 235 army, navy and air force officers of Bangladesh and 21 other countries at Sheikh Hasina Complex of Mirpur Cantonment.

Of the recipients, 125 were from army, 34 from navy and 22 from air force of Bangladesh while the rest 54 were from foreign countries.

Commandant of DSCSC, a prime national defense institution, Major General Md Enayet Ullah delivered the welcome speech at the function when the premier handed over certificates among the graduates.

Senior officials from the three services, high officials and vice-chancellors of several public and private universities were present at the graduation ceremony.

DSCSC provides professional military education to selected mid-career officers of the three armed services and prepares them for assumption of increasing responsibilities both in command and staff appointment.

The PM said her government continued to work to make the armed forces as modern and well-equipped ones so it could move ahead keeping the pace with the modern world.

She recalled the armed forces contribution to the country’s socio-economic development alongside protecting the national independence and sovereignty.

Sheikh Hasina said that alongside the noble responsibility of protecting sovereignty, the members of the patriotic armed forces have also been assisting the civil administration in the country’s development activities and construction of infrastructures.

The members of the armed forces have also earned name and fame in foreign lands with their honesty, dedication and professional acumen and humanitarian qualities in missions abroad, the PM said.

Stating that the armed forces of Bangladesh have been contributing to the United Nations peacekeeping missions now, she said, “I want to develop the armed forces as modern ones so that they can move keeping pace with any country and can face any situation.”

The PM said, “Our armed forces have earned fame wherever (in the world) they work and I feel proud for that.”

She said the armed forces have won the heart of the local people of different countries through rendering humanitarian services there.

In this connection, Sheikh Hasina said the government is running the state with the policy “Friendship to all, malice to none.”

“I can now say that all of the countries have harmonious and friendly relations with Bangladesh,” the premier added.

Spelling out her government’s initiatives for the development and modernization of the armed forces, Sheikh Hasina said in pursuance of the defence policy of Father of the Nation Bangabandhu Sheikh Mujibur Rahman, the government has formulated the ‘Forces Goals 2030′.

Sheikh Hasina said, in the last more than a decade, her government increased the capabilities of the armed forces and made splendid infrastructural development combined with modern training and equipment.

Greeting the graduates of the Bangladesh Military Academy, the PM said, “The necessity of army for an independent and sovereign country is immensely needed and is inevitable.’

Quoting Bangabandhu’s speech in the first passing out parade of the cadets in Cumilla on Jan 11 in 1975, the prime minister said, “If our boys get the full opportunity, they will flourish to compete with any soldier of any country in the world. I believe we would be able to establish such an academy to showcase the institutional capacity to the outer world.”

The PM called upon all to accomplish their respective duties sincerely to make Bangladesh a developed and prosperous country.

“Our economy is strong enough. So, we want to build our country by ourselves and it is the duty of all to work from their respective positions with sincerity to build the country as a developed and prosperous one,” she said.

The PM also elaborated achievements of her government in various sectors in the last more than a decade and said, “Bangladesh is marching ahead.”

The poverty rate has came down to 20.5 per cent while the GDP growth rate increased to 8.15, the per capita income increased to USD 2000 and the inflation rate is contained within 5 percent.

Ninety five percent people of the country have been brought under the electricity coverage, she said.

To materialise the dream of Bangabandhu to build a hunger-and-poverty-free Sonar Bangla, the prime minister said her government has taken a 100-year-long programme like Delta Plan-2100 so that generation after generation get a prosperous and developed country.

She added that Bangladesh is set to celebrate the birth centenary of Sheikh Mujib in 2020 and the golden jubilee of Bangladesh’s independence in 2021 and 2020-2021 has been declared as ‘Mujib Borsho.’

“Bangladesh will definitely be prosperous and free from poverty and hunger as dreamt by the Father of the Nation,” she added.