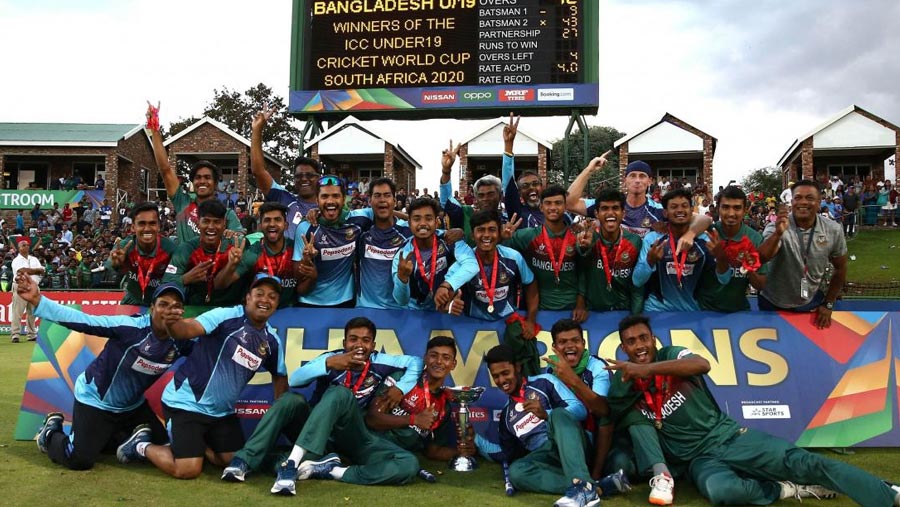 Junior Tigers made history beating the four-time champions India by three wickets in a dramatic final of the ICC Under-19 World Cup on Sunday (Feb 9) at Potchefstroom, South Africa.

Bangladesh won the U19s World Cup for the first time after humbling heavy favourites India in the final in Potchefstroom, South Africa.

India were unbeaten on their run to the final but their batting fell flat against Bangladesh's pace bowlers.

Bangladesh slumped to 102-6 in their chase, but captain Akbar Ali saw them home to spark jubilant celebrations.

That it was so close at the end owed much to India's superb leg-spinner Ravi Bishnoi, who took 4-30 in 10 overs - his victims the first four wickets to fall as Bangladesh collapsed from 50-0 to 65-4.

After earlier retiring hurt, opener Parvez Emon returned to bat in obvious pain and put on 41 with his captain to steady nerves.

A brief rain delay brought Bangladesh's target down to 170, and tailender Rakibul Hasan called Ali through for a single which sealed the historic victory against an India side which had beaten Pakistan by 10 wickets in the semi-final.

"It's a dream come true," Akbar said. "It's all about the hard work we have done over the last two years.

"I would like to congratulate the Indian players. They have been brilliant throughout this tournament.

"Hopefully, this will be the start for us."