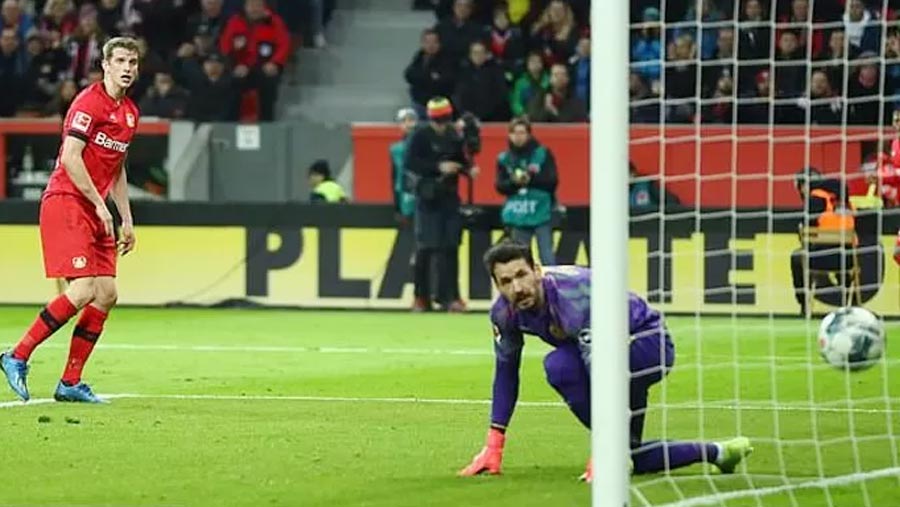 Leon Bailey scored one late goal and made another on Saturday (Feb 8) as Bayer Leverkusen earned a stunning 4-3 win over Borussia Dortmund to deny the visitors the chance to move level on points with Bundesliga leaders Bayern Munich.

Bayer Leverkusen scored twice in two minutes to complete a thrilling comeback as they beat Borussia Dortmund 4-3 on Saturday (Feb 8), denying their visitors a chance to go second in the Bundesliga table.

Kevin Volland swept a shot past Roman Buerki and into the far corner to give Leverkusen the lead in the 20th minute, but Mats Hummels deftly headed home from a corner to put the visitors back on level terms two minutes later.

Emre Can then gave Dortmund the lead with a wonder strike in the 33rd minute, picking up the ball well outside the box before unleashing a brilliant dipping shot that curled into the net past the despairing dive of Lukas Hradecky.

Undeterred, Leverkusen were back level two minutes before halftime as Dortmund failed to clear a corner and Volland struck his second goal of the game.

Dortmund went ahead again in the 65th minute with a superb team goal, working the ball quickly in from the right before Achraf Hakimi set up Raphael Guerreiro for a simple side-footed finish.

The visitors looked to be cruising to victory until goals from Leon Bailey and Lars Bender in the 81st and 82nd minutes put Leverkusen back in the driving seat, with Dortmund failing to recover from the one-two punch.

The defeat left Dortmund third in the table on 39 points from 21 games, three points behind leaders Bayern Munich, who play second-placed RB Leipzig (41 points) on Sunday. Leverkusen remain fifth on 37.

Earlier in the day, Paderborn's Klaus Gjasula scored a superb header to earn them a 1-1 draw away to Schalke 04 while a Robin Quaison hat-trick gave Mainz a 3-1 victory over Hertha Berlin.

Schalke's Ahmed Kutucu had given them the lead in the 63rd minute but midfielder Gjasula rescued a point for bottom-of-the-table Paderborn when he scored with a powerful header from a corner with nine minutes remaining.

Sweden international Quaison earned Mainz a valuable away win, scoring in the 17th and 82nd minutes before a Dedryck Boyata effort gave Hertha some hope. Quaison, however, netted his third from the spot in the 90th minute to put the game beyond doubt.

A Luca Waldschmidt penalty gave Freiburg a narrow 1-0 win at home to Hoffenheim, while Wolfsburg had Marin Pongracic sent off as they drew 1-1 with Fortuna Duesseldorf and Marius Bulter scored twice as Union Berlin beat second-from-bottom Werder Bremen 2-0.