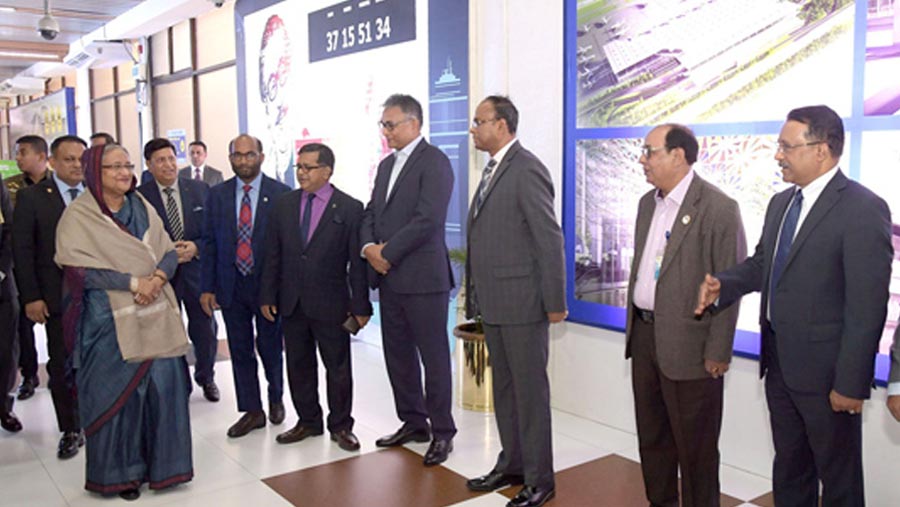 Prime Minister Sheikh Hasina returned home this morning from Milan concluding her four-day official visit to Italy at the invitation of her Italian counterpart Giuseppe Conte. An Emirates Airlines flight carrying the PM and her entourage members landed at Hazrat Shahjalal International Airport in Dhaka around 8 a.m.

On Friday, Sheikh Hasina departed from Milan Malpensa International Airport for Dhaka at 1.45 p.m. (local time). Bangladesh Ambassador to Italy Abdus Sobhan Sikdar saw the premier off at the airport.

On her way back home, the PM made over two-hour stopover in Dubai.

Sheikh Hasina reached Italian capital Rome on Feb 4 from Dhaka. She went to Milan from Rome on Thursday afternoon.

During the visit, the Bangladesh PM held a bilateral meeting with Giuseppe Conte at Palazzo Chigi, the official residence of the Italian PM, in the Italian capital on Feb 5 and also joined an official lunch there.

The two leaders, at the nearly one-hour meeting, discussed the entire gamut of bilateral relations and expressed satisfaction over the present state of economic cooperation between Bangladesh and Italy.

The two Prime Ministers stressed the need for bolstering cooperation in different fields for mutual benefits of the two countries.

At the talks, the Italian premier pledged to provide one million Euros for the help of the Rohingyas in addition to existing assistance through the UNHCR.

Earlier in the morning, Sheikh Hasina inaugurated the Chancery Building of Bangladesh Embassy in Rome in Via Dell’Antartide area.

In the afternoon, representatives of the Italian business companies paid a call on the Bangladesh prime minister at the meeting room of her place of residence.

The PM then attended a dinner hosted by the Bangladesh ambassador to Italy at Parco dei Principi Grand Hotel and Spa.

On Feb 6, Sheikh Hasina had an audience with Pope Francis, the spiritual leader of the Catholics of the world, at the Holy See (Vatican City) near the Italian capital.

The premier attended a reception accorded in her honour by Italy chapter of Awami League at Parco dei Principi Grand Hotel and Spa in the evening of Feb 4.