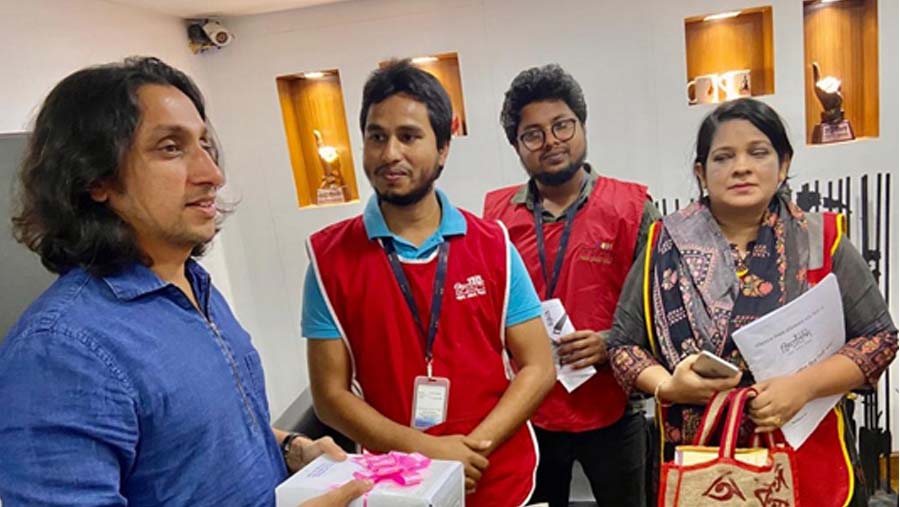 Team members of Ek Takay Ahar (One Taka Meal), a beacon of hope for the poor and starving people in Bangladesh, met Radwan Mujib Siddiq, a trustee of Centre for Research and Information (CRI) and a grandson of Father of the Nation Bangabandhu Sheikh Mujibur Rahman, on Thursday (Feb 6).

The non-profit organisation, which collects surplus food from restaurants and other establishments to feed the poor people, considered it as a rewarding moment since they shared their story with Radwan at his CRI office at Dhanmondi in Dhaka, local media reported.

Radwan, a strong advocate of youth development, who had previously overseen Joy Bangla Youth Award recognising the efforts of young change makers in the society, listened to their journey intently.

CRI trustee and State Minister for Power, Energy and Mineral Resources Nasrul Hamid was present on the occasion.

Ek Takay Ahar has been serving the society since 2006 by providing an alternative to discarding surplus food and feeding the underprivileged people with that.

What inspired the organisation to launch this initiative is the heart-wrenching fact that a considerable amount of food goes to the waste bin every day, while more than a couple of million people sleep with an empty stomach.