Joy steers Bangladesh to first ever U-19 WC final 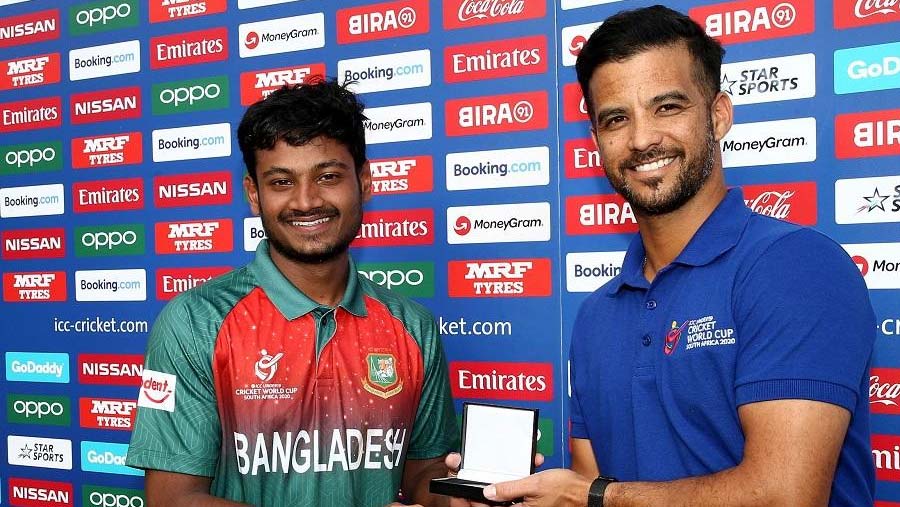 It was a match-winning century came from Mahmudul Hasan Joy steered Bangladesh to first ever U-19 Cricket World Cup final with an overwhelming six-wicket victory over New Zealand in the second semifinal at Potchefstroom on Thursday (Feb 6).

Bangladesh will now take on mighty India in the final scheduled to be held on Sunday (Feb 9) at the same venue.

Joy played a classy knock of 100-run off 127 balls and also involved two important partnerships. He first shared 68 runs with Towhid Hridoy (40) for the third wicket stand and again paired 101 runs stubborn partnership with Shahadat Hossain for the fourth wicket stand, to take Bangladesh closer to the victory, after New Zeland set a winning target of 212 runs.

Shahadat, who provided an ample support to Joy during the Bagladesh’s chase, completed the remaining formalities along with Shamim Hossain as Bangladesh chase down the target making 215 runs for the loss of three wickets with 35 balls to spare.

Shahadat hit four boundaries during his 47 balls stay on the crease.

Mahmudul Hasan Joy of Bangladesh was named the player of the match for his match-winning century.

Earlier, India crushed Pakistan by 10 wickets to storm into their third successive final in the tournament.

Forced to bat first by Bangladesh New Zealand, Bangladesh picked up early wickets with Shamim Hossain taking the first wicket New Zealand opener Rhys Mariu in the second over of the innings before Rakibul Hasan, who finished the figures of 35 for 1 in 10 overs, struck again on New Zealand innings picking up the wicket of another opener Ollie White in the 12th over, leaving the Black Cap in a trouble.

The young Tigers’ bowlers continued their domination Shamim picked up his second wicket on the day dismissing Fergus Lellman for 24 while Hasan Murad joined the party picking up the wicket of Black cap’s captain Jesse Tashkoff for 10. After losing four wickets for 74 runs in the 26th over, Nicholas Lidstone and Beckham Wheeler-Greenall took the responsibility to repair the damage with a useful partnership of 67-run for the fifth wicket stand.

Beckham played a responsible unbeaten innings of 75 off 83 deliveries with five boundaries and two over boundaries to take the team’s total over 200 mark while Nicholas supported him with a priceless knock off 44 off 74 balls laced with two boundaries before he was trapped leg before wicket by young left-arm pacer Shoriful Islam who was the most impressive with ball taking three wickets for 45 runs.