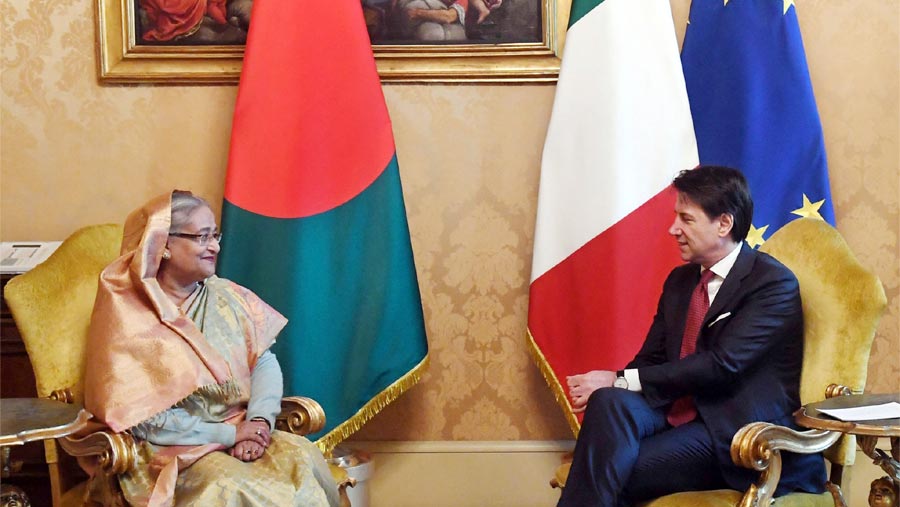 Dhaka and Rome on Wednesday (Feb 5) agreed to further bolster cooperation in different fields as visiting Bangladesh Prime Minister Sheikh Hasina held bilateral meeting with her Italian counterpart Giuseppe Conte. At the meeting, Italy also pledged to provide one million Euros for the help of the Rohingyas in addition to the existing assistance.

“Both the Prime Ministers stressed the need for enhancing cooperation in different fields for mutual benefits of the two countries,” PM’s Press Secretary Ihsanul Karim told reporters after the talks at Palazzo Chigi, the official residence of the Italian PM.

Nearly one hour talks, he said, the two premiers discussed the entire gamut of bilateral relations and both of them expressed satisfaction at the present state of economic cooperation between the two countries.

The Italian PM described his talks with Bangladesh Premier Sheikh Hasina as “fruitful” and said it is the beginning of another new chapter in their relations with Dhaka.

“I appreciate your ‘super humanitarian’ endeavours in hosting over 1.1 million Rohingya nationals in Bangladesh,” the press secretary quoted the Italian premier as saying.

In this connection, the Italian PM said in addition to the existing assistance, his country will provide one million Euros for the help of the Rohingya citizens through the UNHCR.

The press secretary said the Bangladesh prime minister urged the international community including Italy to ensure so that Myanmar obeys the instructions of the International Court of Justice on the Rohingya issue.

Terming Italy as a great friend of Bangladesh, the Bangladesh prime minister recalled that Italy was the first few European countries to recognise Bangladesh immediately after independence.

Regarding her visit to Italy, Sheikh Hasina hoped that due to this visit the bilateral relations will reach a greater height.

The press secretary said the Bangladesh PM at the talks gave some suggestions regarding the cooperation, saying that areas could be expanded in the greater interest of the two countries.

In reply, the Italian premier said his country will consider these suggestions with a great attention.

Giuseppe Conte put emphasis on strengthening cooperation between the two countries in the fields of energy and defence.

“Italy can offer many products to Bangladesh,” he said

The Bangladesh PM invited Italian entrepreneurs to invest in Bangladesh in a bigger volume.

“Bangladesh has the best investment-friendly policy in South Asia, and Italian investors can invest in Bangladesh in a larger volume by taking this advantage,” she said.

She went on saying: “Her government is establishing 100 economic zones across the country and Italian entrepreneurs can also invest there.”

Sheikh Hasina said Bangladesh offers a large market to its neighbourhood including a huge domestic market with a growing middle class population.

She requested the Italian government to facilitate visas for the Bangladeshi businesspeople to help boost trade and investment between the two countries.

The PM said Italy can import more leather and leather goods from Bangladesh.

Sheikh Hasina said Italy is hosting the highest number of Bangladeshi workers after Britain and they are contributing a lot to the economy of both the countries.

In this connection, she said Bangladesh is committed to preventing illegal migration.

She said her government has brought down the poverty rate to 20:5 percent from 41:5 percent in 2006.

He also appreciated expatriate Bangladeshis working in Italy, saying that they are very hard working.

The Italian PM thanked the Bangladesh government for taking prompt action after the Holey Artisan Cafe attack in Dhaka. Twenty-two people including nine Italian citizens were killed in the Jul 1, 2016 attack.

In reply, Sheikh Hasina said the attack was crushed within few hours, and since then terrorism in Bangladesh is under total control.

Terming terrorism as a global problem, the prime minister said her government is spearheading a campaign against the social menace by involving the cross section of people.

Sheikh Hasina invited her Italian counterpart to join the Mujib Borsho Programmes that will be held from Mar 17, 2020 to Mar 26, 2021. The Italian prime minister informed Sheikh Hasina that they will celebrate the golden jubilee of establishing diplomatic ties between the two countries in 2022.

Earlier, on her arrival at the at Palazzo Chigi, which is also known as the palace of the Italian premier, Sheikh Hasina was given a guard of honour by the palace guards, the press secretary said.

He said the national anthems of the two countries were played on the occasion.