None can pull Bangladesh backward any more, says PM 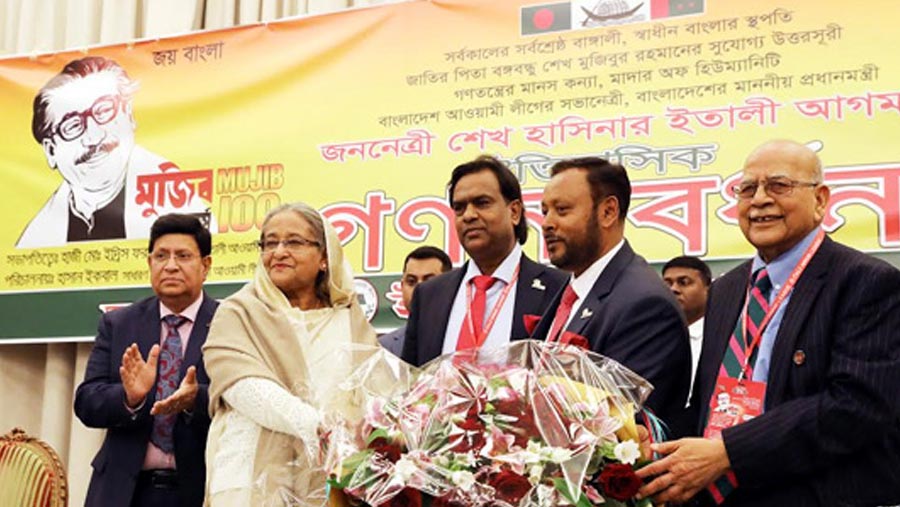 Prime Minister Sheikh Hasina has said Bangladesh has attained an ability to advance further by competing any nation of the world and asserted that none can pull the country backward any more.

“We’re implementing 90 percent of our development projects by our own fund … now donors don’t come to give alms to us. Rather they come to provide assistance mentioning us their development partners. Because we don’t want alms to anybody,” she told a reception in Rome last night.

Pointing out the construction of the Padma Bridge by the government’s own fund, the PM said: “We’ve proved that we could do any work by ourselves.”

Sheikh Hasina said the World Bank wanted to put blame on the government regarding the bridge. “I had taken it as a challenge, saying that we’ll build the bridge by our own fund and now we’re implementing the project by our money,” she said.

The PM said Bangladesh earned independence through liberation war under the leadership of Bangabandhu. “So I promised that whenever we’ll come to power, we’ll build the country in such a way so that Bangladesh can move with dignity on the world stage,” she said.

Sheikh Hasina went on saying: “We can now claim that we’ve been able to bring the image of Bangladesh to that position.”

Mentioning that the country is advancing fast economically, the prime minister said the Father of the Nation had turned Bangladesh into a least developed country by rebuilding the war-ravaged country.

“Our government has given Bangladesh a status of a developing country from that position and we’ve to keep up the status till 2024 to transform Bangladesh into a middle income country … we’ve already attained three criteria that are needed to achieve the target,” she said.

She added: “None can take us backward anymore and we’ll move ahead — it’s the biggest word.”

The PM said those who grabbed power illegally after the assassination of Bangabandhu were busy to change their own lot, not the change the fate of the people.

“At that time Bangladesh was known as a country of cyclone, tidal surge and famine in the world and the people of the world saw Bangladesh in the eyes of neglect during the period which was shameful and painful for us,” she said.

Sheikh Hasina said her government has brought down extreme poverty rate to 10 percent and poverty rate 20.5 percent. “Insha Allah we could cut the rate by two/three percent more by this year and for this we’ve taken some special programmes,” she said.

“We don’t want a single person to remain poor and none can see us in the eyes of compassion … Bangladesh earned independence through liberation war and as a victorious nation, it’ll move keeping its head high and this is our aim,” she said.

Vowing that not a single person to remain homeless, the prime minister said her government is constructing houses for the homeless people through Ashrayan Project and also formed housing fund for them.

“Not a single people will remain homeless by Mujib Borsho,” she said, adding Taka 100 crore has been allocated separately in the budget for rehabilitation of the river erosion-hit people.

Spelling out her government’s various steps for the welfare of the expatriate Bangladeshis, Sheikh Hasina said her government has set up Probashi Klayan Bank so that the people intending to go abroad do not need to sell their land or property for this purpose.

The PM said the government has set up 5,800 digital centres through which the people intending to go abroad can register their names in the expatriates welfare ministry.

“We’ve also taken an initiative so that we can send 1000 people abroad from every upazila and for this, we’ve made arrangements for smart card for them,” she said.

Sheikh Hasina said her government previously introduced machine readable passport. “Now it’s the era of e-passport and we’ve already started work on giving e-passports so that none can become a victim of cheating,” she said.

She said steps have been taken so that the passengers do not become victims of harassment in the airports in Bangladesh. “We’re constructing the third terminal at Hazrat Shahjalal International Airport to provide better services to the passengers,” she said.

The PM said her government has given importance to technical education to generate more employment. “We’ve taken steps to build a skilled manpower in the country and for this we’re setting up a technical education institute in every upazila,” she said.

About the country’s tremendous socioeconomic development in the last 11 years, she said there is no magic behind the success.

“For this, it’s necessary to know and understand the country with utmost sincerity, love the people and keep confidence and trust in them and work for their welfare … we’ve learned it from our parents,” she said.

Sheikh Hasina said Bangabandhu had a huge dream with the people of the country and as his children: “We know his desire, and sacrificing all things of life, I’m doing only work that the luck of the people of Bangladesh must be changed and to achieve the goal, we’re taking every step.”

The PM said as a political party Awami League has an economic policy and manifesto, adding, “We don’t only giving an election manifesto … we frame budget every year keeping the manifesto ahead,” she said.

Sheikh Hasina said: “There are many works left and as much time I get, I try to utilise that time to develop the country fast and I seek cooperation of all in this regard.”

About the demand of the expatriate Bangladeshis living in Italy for launching Biman flight here, she said the discussion is underway with the Italy government in this regard. “I’ll also raise the issue before the Italy prime minister during our talks,” she said.

Bangladesh Ambassador to Italy Abdus Sobhan Sikdar and President of UK Chapter Awami League Sultan Mahmud Sharif were present on the dais. A huge number of leaders and workers of Awami League and its associate organisations from different European countries also joined the event.

The PM arrived in Rome on Tuesday (Feb 4) afternoon for a four-day official visit to Italy at the invitation of her Italian counterpart Giuseppe Conte.