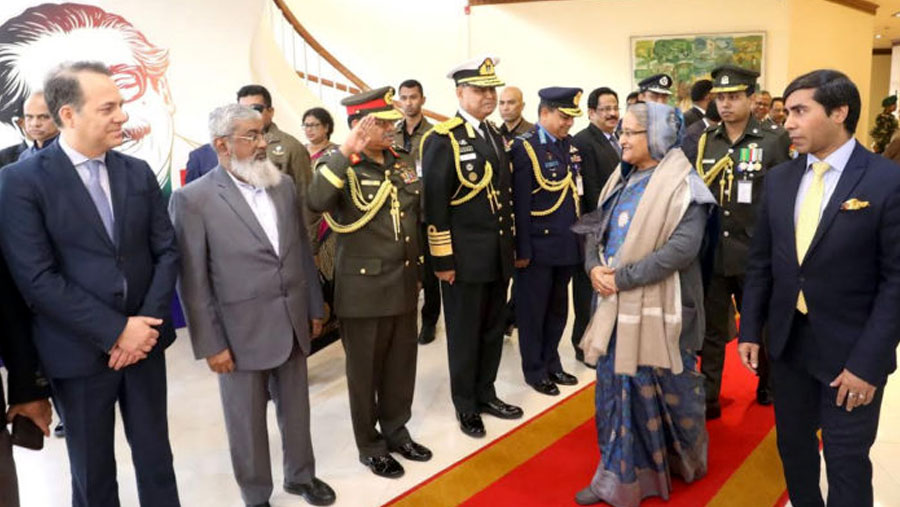 Prime Minister Sheikh Hasina left Dhaka for Rome on Tuesday (Feb 4) morning on a four-day bilateral visit to hold talks with her Italian counterpart Giuseppe Conte. A VVIP flight of Biman Bangladesh Airlines carrying the Prime Minister and her entourage took off from Hazrat Shahjalal International Airport in the morning.

Liberation War Affairs Minister A K M Mozammel Haque, Agriculture Minister Dr Abdur Razzaque, Chief Whip Noor-E-Alam Chowdhury Liton, State Minister for Civil Aviation and Tourism Md. Mahbub Ali were present at the airport to see the premier off. Besides, the cabinet secretary, the chiefs of the three services, the Inspector General of Police (IGP), the dean of the diplomatic corps and high civil and military officials were present.

The flight is scheduled to land at Fiumicino Airport, Rome in the afternoon (Italian time). Minister Plenipotentiary of Italian Foreign Ministry Cristiano Cottafavi and Bangladesh Ambassador to Italy Abdus Sobhan Sikder will receive her at the airport, local media reported.

Sheikh Hasina will attend a reception to be accorded in her honour at Parco dei Principi Grand Hotel and Spa in the evening.

On Wednesday, the PM will inaugurate the Chancery Building of Bangladesh Embassy at Via Dell'Antartide in Rome. After that, Sheikh Hasina will hold her bilateral talks with Italian Prime Minister Giuseppe Conte at Palazzo Chigi and join the official lunch.

On Thursday, Sheikh Hasina will have an audience with Pope Francis in the morning.

On Friday, the PM will leave Milan Malpensa International Airport for home by an Emirates flight. Bangladesh Ambassador to Italy Abdus Sobhan Sikder will see the PM off at the airport.

She will reach Hazrat Shahjalal International Airport in Dhaka on Saturday morning.

Three bilateral instruments are likely to be signed between Dhaka and Rome during Sheikh Hasina’s visit to Italy, said Foreign Minister Dr A K Abdul Momen while briefing reporters on Sunday. The proposed deals are on cultural exchange, political consultations and cooperation in the diplomatic field, Momen added.