Barca beat Levante to get title bid back on track 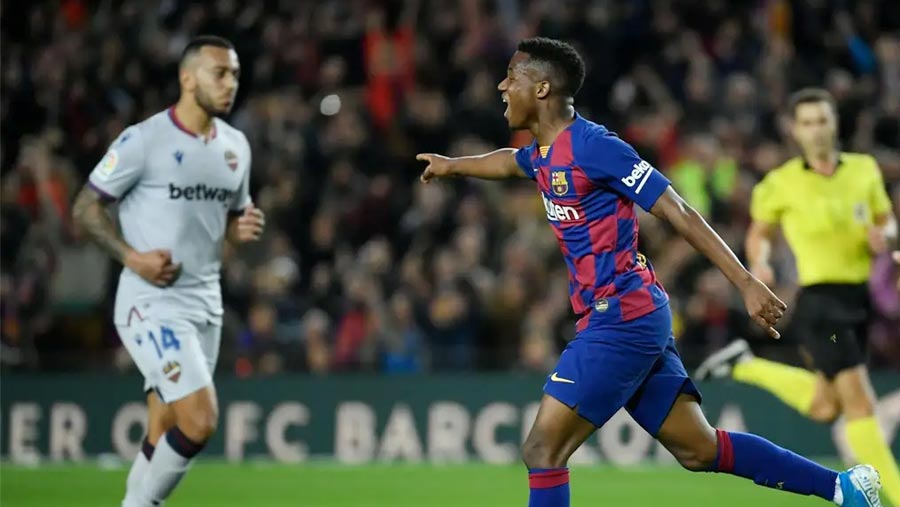 Quique Setien’s side were dominant virtually throughout, but had to wait until the half-hour mark to take the lead.

Lionel Messi split Levante’s back line with a wonderful pass from deep for Fati to run onto and the youngster cut inside and fired through the legs of Aitor Fernandez from just inside the box.

Two minutes later, the same combination made it two as Messi embarked on a run and then slid the ball left on the edge of the box for Fati, who sidestepped his marker and fired another fierce shot which went through Fernandez and in off the goalkeeper.

Barca were rampant at that stage and it looked like the Catalans might rack up another big score after thrashing Leganes 5-0 in the Copa del Rey on Wednesday night.

Nelson Semedo grazed the crossbar, Antoine Griezmann missed from close range and Messi saw a number of efforts either saved, blocked or just wide of the target.

Fati then hit wide with an overhead kick in the second half and Messi was again denied on a couple more occasions as Barca somehow failed to add to their tally.

And at the other end, Levante had a couple of chances too. Jorge Miramon fired a shot over after Ter Stegen had parried from Jose Campana and substitute Hernani stung the German’s hands with a fierce effort.

Ruben Rochina grabbed a consolation close to the end, when he volleyed from the edge of the area and his shot took a touch off Ruben Vezo and unsighted Ter Stegen, who could only help it into the corner of the net.

And Rochina hit another volley right at the end as Levante threatened an unlikely comeback, but this one sailed over the bar.

It would have been extremely harsh on Barcelona after almost complete dominance by the Blaugrana and Setien’s side move back to win three points of leaders Real Madrid at the top of LaLiga.

Levante, meanwhile, are in 13th place, eight points clear of the relegation zone after 22 rounds of the competition.