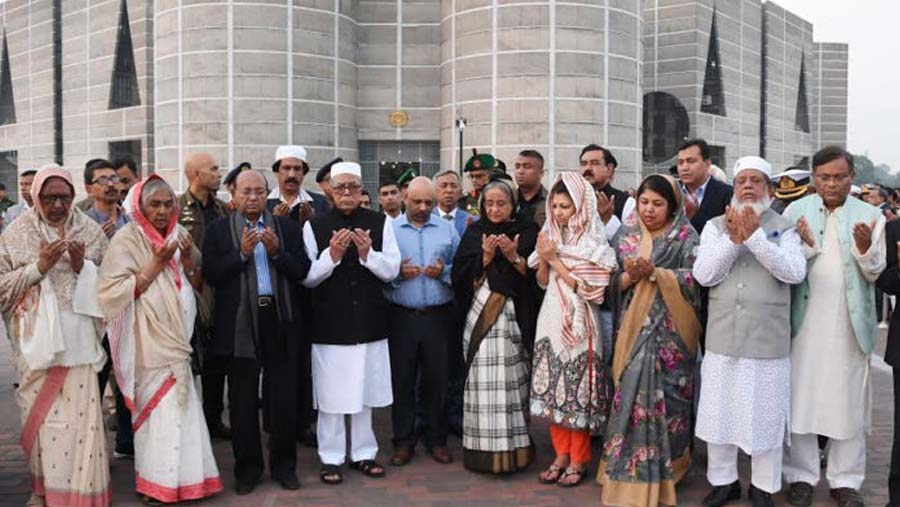 Later, accompanied by senior party leaders, Sheikh Hasina, also the president of Awami League, laid another wreath on the coffin of Ismat Ara Sadique on behalf of the party.

The President and the PM later talked to the family members of the deceased and consoled them. They also prayed for eternal peace of the departed soul.

Besides, Jatiyo Sangsad Speaker Dr Shirin Sharmin Chaudhury and Deputy Speaker Fazle Rabbi Mian as well as the chief whip and whips placed wreaths on the coffin of the deceased.

On behalf of the Leader of the Opposition in Parliament, Jatiyo Party Secretary General Moshiur Rahman Ranga, MP, placed a wreath on the coffin of Ismat Ara Sadique.

Earlier, a Namaz-e-Janaza of Ismat Ara Sadique was held at the South Plaza of Jatiyo Sangsad Bhaban.

The President, the ministers, the deputy speaker, the chief whip, whips, parliament members and the leaders of different political parties attended the janaza.

A munajat was offered on the occasion, seeking eternal peace of the departed soul, local media reported.

Ismat Ara Sadique, who was elected MP from Jashore-6 constituency, died at a hospital in Dhaka this morning at the age of 78.