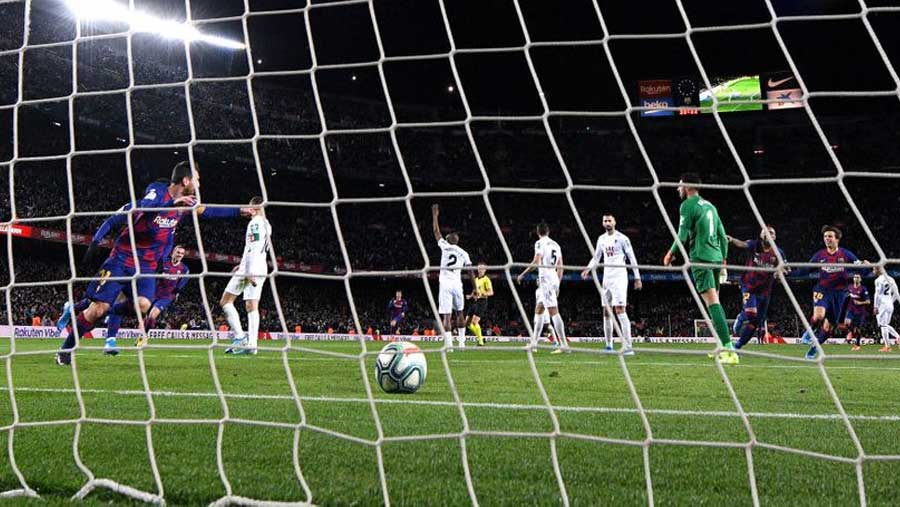 Lionel Messi scored the only goal of the game as F.C. Barcelona beat 10-man Granada 1-0 in La Liga on Sunday (Jan 19) at the Camp Nou in new manager Quique Setien's first game in charge.

Lionel Messi's second-half strike against 10-man Granada gave new coach Quique Setien a winning start at F.C. Barcelona, but it was not a convincing display by the La Liga champions.

Barca had more than 80% of the possession, but the build-up was often slow and ponderous at the Camp Nou. Setien's tactics for Barcelona's attack was to try to go through the middle of the backline, but more often than not they were suffocated by a well-drilled defence.

That defence lost a man when German Sanchez was shown a second yellow in the 69th minute for a foul on Messi, and seven minutes later Barcelona were ahead.

The home side persisted with the tactic of going through the middle as the Argentine linked up with Antoine Griezmann; he found Arturo Vidal, whose drag-back teed up Messi to stroke home.

It was a moment of vintage Barcelona, and the win puts them back on top of La Liga - ahead of Real Madrid on goal difference.

Setien celebrated enthusiastically after the goal and on the final whistle, six days after replacing Ernesto Valverde at the Catalan club.

The 61-year-old, who signed a two-and-a-half-year deal, had been out of work since he left Real Betis in the summer. He enhanced his reputation at the Seville side by leading them to sixth place and qualification for the Europa League.

Barca created very few other good chances. Teenager Ansu Fati, who started in a front three with Messi and Griezmann, had two early efforts, one of which resulted in a superb save from Rui Silva. And in the second half Messi's low strike struck the side-netting.

Granada spent most of the match defending, but a brief spell after the break saw them go close to scoring when Yan Eteki's firm low strike came off the post.

Barcelona's next match is a Copa del Rey quarter-final match at Ibiza on Wednesday.