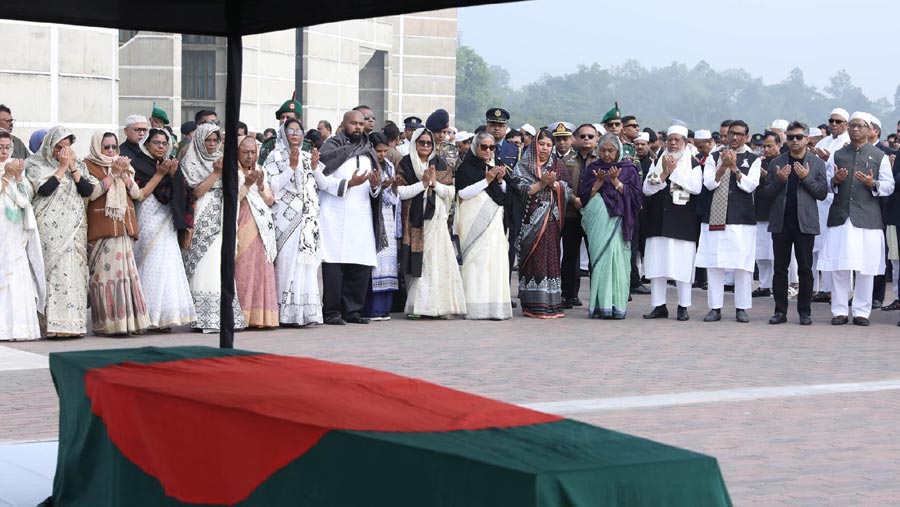 Prime Minister Sheikh Hasina paid tributes to Bangladesh Awami League lawmaker of Bogura late Abdul Mannan by placing a wreath on his coffin at the South Plaza of Jatiyo Sangsad Bhaban in Dhaka this morning. After placing the wreath on the coffin draped in the national flag, the prime minister stood in solemn silence for some time as a mark of profound respect to the memory of Abdul Mannan.

Later, accompanied by senior party leaders, Sheikh Hasina, also the president of Awami League, laid another wreath on the coffin of Abdul Mannan on behalf of the party.

Earlier, on behalf of President Md. Abdul Hamid, his military secretary placed a wreath on the coffin of the Awami League lawmaker.

Besides, Jatiyo Sangsad Speaker Dr Shirin Sharmin Chaudhury and Deputy Speaker Fazle Rabbi Mian as well as the chief whip and whips placed wreaths on the coffin of the deceased.

On behalf of the Leader of the Opposition in Parliament, Jatiyo Party Secretary General Moshiur Rahman Ranga, MP, placed a wreath on the coffin of Abdul Mannan.

A guard of honour was given to Abdul Mannan, also a valiant freedom fighter, on behalf of the Dhaka district administration.

Earlier, a Namaz-e-Janaza of Abdul Mannan was held at the South Plaza of Jatiyo Sangsad Bhaban. Ministers, the deputy speaker, the chief whip, whips, parliament members and the leaders of different political parties attended the Janaza. A Munajat was offered on the occasion, seeking eternal peace of the departed soul, local media reported.

Abdul Mannan, who was elected the MP from Bogura-1 (Sariakandi-Sonatola) constituency, died of a cardiac arrest at a hospital in Dhaka on Saturday at the age of 67.

He was a former organising and publicity secretary of the Awami League and an ex-president of Bangladesh Chhatra League.