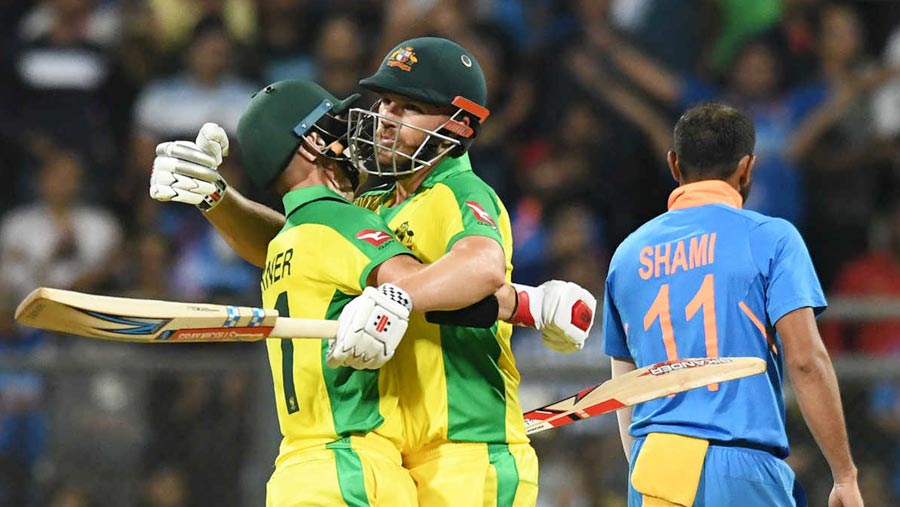 David Warner and Aaron Finch both struck unbeaten centuries as Australia hammered India by 10 wickets in the first one-day international in Mumbai.

Warner's unbeaten 128 and 110 not out from captain Finch took the tourists to their target of 256 with 78 balls to spare.

India had earlier been bowled out for 255, with Mitchell Starc claiming 3-56.

Australia lead the three-match series 1-0, with the second game in Rajkot on Friday.

The home side were taken to 134-1 by a second-wicket stand of 121 between KL Rahul and Shikhar Dhawan, only for Rahul to become the first to fall in a collapse of four wickets for 30 runs.

In addition, Rishabh Pant was struck on the head by a delivery from Pat Cummins and was subsequently unable to keep wicket.

In putting on an unbroken 258 for the first wicket, Warner and Finch compiled the highest partnership by any pair in an ODI against India.

Warner now has had a part in the three highest Australia partnerships in ODIs, having added 284 with Travis Head against Pakistan in 2017 and 260 with Steve Smith against Afghanistan in 2015.