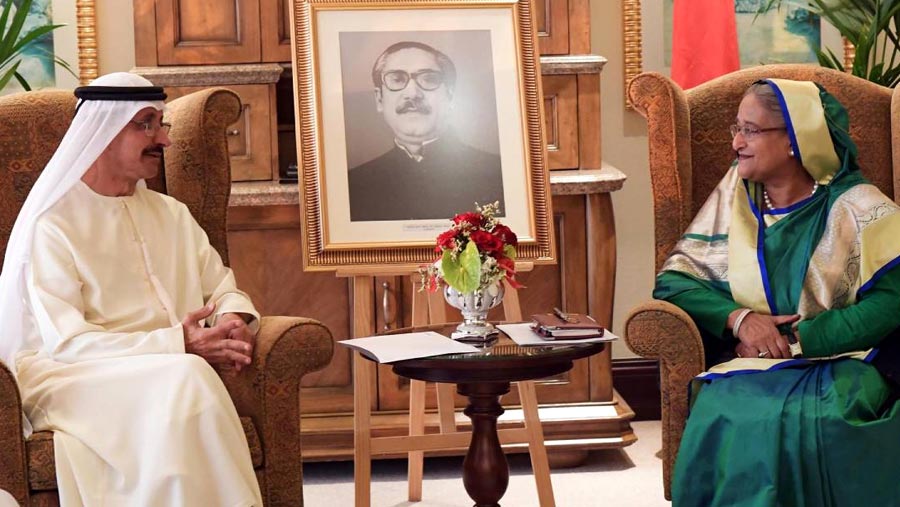 “We expect your (DP World) investment in larger volume in Bangladesh’s port, shipbuilding and ICT sectors alongside the power and energy,” she said when delegations of the prominent UAE companies including the DP World called on her at her place of residence at Shangri-La Hotel in Abu Dhabi, United Arab Emirates.

Besides, a team of eminent UAE businesspeople called on the PM there, the press secretary said.

During the meetings, he said, the delegation members apprised the premier of the progress in setting up a 1300 megawatt power plant at Sonagazi for which land was allocated by the Bangladesh government.

The PM called upon the UAE companies, particularly the DP World, to set up a hi-tech park in Bangladesh.

They applauded Bangladesh for its tremendous progress in the ICT sector as the country has secured the second largest suppliers of outsourcing.

The DP World is a world leader in global supply chain solutions; specialising in cargo logistics and port terminal operations.

Meanwhile, the (Addendum to the previous MoU) signed between Emirates National Oil Company (ENOC), UAE, and the Ministry of Power, Energy and Mineral Resources, Bangladesh was inked in the presence of Prime Minister Sheikh Hasina.