President asks for all-out campaign against cheating in exams 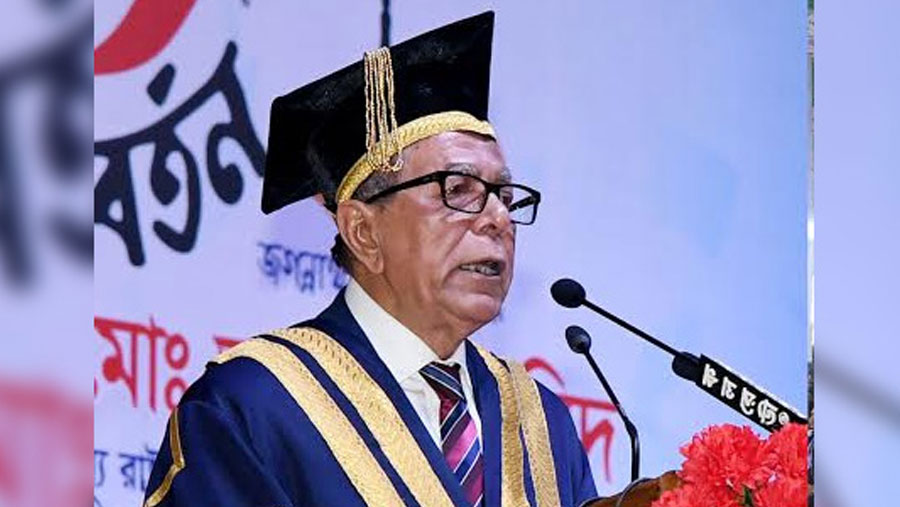 President Md. Abdul Hamid on Saturday (Jan 11) asked for all-out campaign against adopting unfair means in examinations calling the practice a matter of “shame” as he addressed the first convocation of Jagannath University (JnU) in Dhaka as the Chancellor, local media reported.

“The resistance against cheating in exams has to be forged at all levels,” he told the ceremony when 18,284 students were conferred with the graduation and post graduation degrees while another 11 obtained Master of Philosophy (M. Phil) and six Doctor of Philosophy (PhD) degrees.

The President expressed his extreme annoyance about such practices saying he particularly felt “ashamed when teachers help examinees to adopt unfair means in examinations and parents supply answer copies at exam halls”.

“This is really unfortunate, ignominious and frustrating,” he said adding that teachers, guardians and students particularly needed to play the key role in preventing the menace.

President Hamid said he intended to take stern punitive actions against cheating in exams and asked students “to realize what I mean”.

“I failed in examination several times in my life but never adopted any unfair means (and) even didn’t ask anybody what will be the answers to the questions. I really feel proud of that,” he said.

The ceremony was held at Dhupkhola Playground in old part of the capital when noted physicist Professor Emeritus Dr Arun Kumar Basak addressed the function as the convocation speaker.

The President urged the university teachers to prove their honesty, devotion and expertise in their respective duties discarding unethical practices of any type keeping in mind the dignity of their profession.

“Think, if you (teachers) do favour any irregularity or involve in corrupt practices, what will be the situation of the universities,” he questioned.

The President expressed his resentment over a trend among teachers to run weeklong evening courses particularly at private universities hampering their regular functions in their respective departments.

“The Vice-Chancellors, as chief executive of the universities, must take tougher stance to prevent such practices . . . You (VCs) must monitor the overall academic activities properly alongside your administrative functions,” said the President, who is the chancellor of all universities.

The President also drew the students and new graduates attention to other social issues, particularly the trend of traffic rules violation and sought their active role in motivating the people to abide by the rules to ensure discipline on the street.

“There are foot-over passes but none use them . . . I request you to motivate people,” he said.

The President also laid emphasis on protecting the traditional Bengali culture against the backdrop of the aggression of satellite culture saying the intelligentsia to take a firm stand in this regard.

“Due to influence of satellite culture, the identity of Bengali culture with its longstanding heritages is about to be faded out in the current era of globalization . . . promote our Bengali culture in universities,” he said.

Hamid simultaneously urged the graduates to uphold the values and sprit of the 1971 Liberation War in their mind.

“There is no alternative to know the actual history of freedom struggle to become a good citizen . . . it is also needed to uphold equality, humanity and social justice,” the President said.

He congratulated the graduates for attaining their degrees and asked them not to favour any lie and impropriety.

“The country would be rich and developed through your creativity and leadership in days to come,” the president said expecting them to uphold country’s image country by building “Sonar Bangla” envisioned by Father of the Nation Bangabandhu Sheikh Mujibur Rahman.

A nearly 150-year old academic institution JnU was established as Brahmah School in 1863, later to become Jagannath College, and emerged as a public university in 2005.