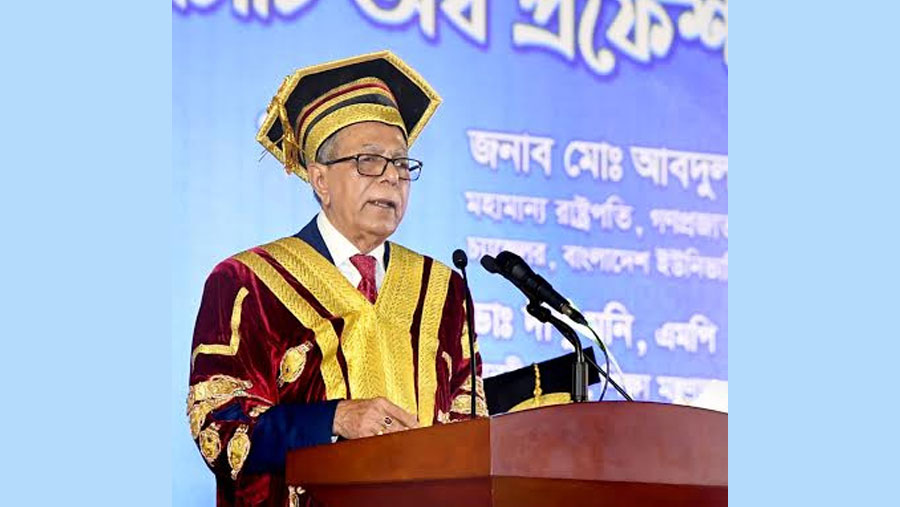 President Md. Abdul Hamid on Moday (Jan 6) asked universities to design curriculum keeping in mind job market demands alongside providing quality education for enhanced competitiveness of their students as he joined the Bangladesh University of Professionals (BUP) convocation as the chancellor.

“Introduce the educational curriculum which matches with the job market demands,” he said while addressing the military-run BUP’s fifth convocation on its campus in Dhaka, local media reported.

The President, who is also the Chancellor of the country’s all universities, said profession-centered education appeared crucial to enable students face competition as “we are exposed to a steep global competition”.

A total of 1,778 students were conferred with graduation degree while seven researchers got Doctor of Philosophy (PhD) degree at the ceremony where National Professor Dr Anissuzzaman delivered as the convocation speaker. The head of the state noted with appreciation that Prime Minister Sheikh Hasina declared her government’s Vision-2021 and spearheading the Digital Bangladesh campaign taking into account the global realities.

President Hamid congratulated the graduates for obtaining their degrees and urged them to play their part in building a happy, prosperous, self-reliant and dignified ‘Sonar Bangla’ earlier envisioned by Father of the Nation Bangabandhu Sheikh Mujibur Rahman.

The President, however, said education should not be meant for mere securing certificates by going through notebooks; rather it must turn one as an “enlightened individual”.

Hamid said he believes quality education generates in students a sense of patriotism, non-communal attitude and infuse in them intellectual qualities alongside ensuring their prosperity in future life.

He reminded particularly the BUP graduates that the country and society contributed a lot to help them attain the degrees which now obligated them to return the debt by working for the welfare of their homeland utilizing their wisdom, talent and prudence.

He simultaneously advised them not to get frustrated ever in the face of any adverse situation.

The President urged all students of the country to spearhead a nationwide cleanliness campaign and motivate people to abide by some general rules like the traffic one, which he said was now being meticulously maintained inside the cantonments and outside the country.

The President called upon students to work for changing the habit of people from their respective positions to establish discipline at all levels. At the outset of his speech, Hamid paid rich tribute to Father of the Nation, martyrs of 1971 Liberation War martyrs, 1952 Language Movement and other democratic movements of the country.

He also handed over gold medals to 34 students for their outstanding results in their respective departments.