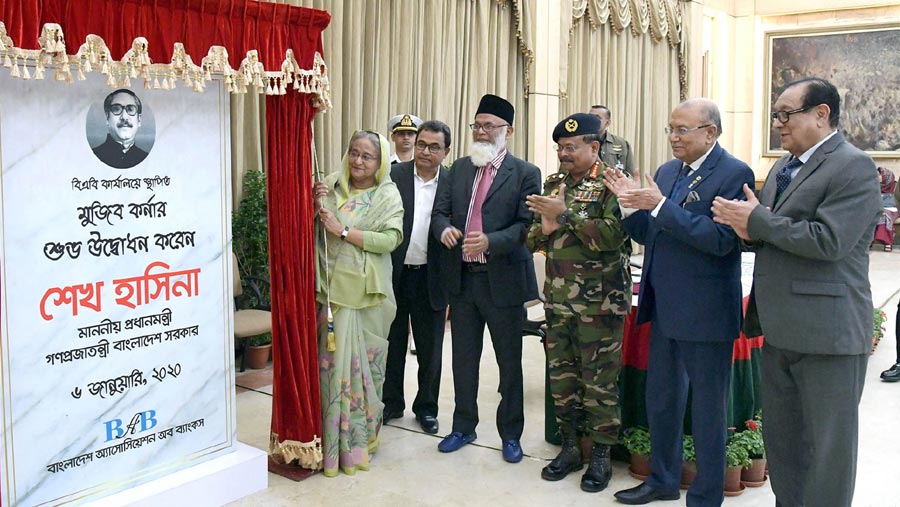 Prime Minister Sheikh Hasina on Monday (Jan 6) expressed hope that the banks will implement the single digit interest rate from April for the sake of the speedy industrialization and investment. The premier expressed such hope when a delegation of Bangladesh Association of Banks (BAB), led by its President Nazrul Islam Mazumder, met her at her official Ganabhaban residence in the evening.

The BAB leaders handed over cheques for Taka 225 crore to the PM as donation to the Father of the Nation Bangabandhu Sheikh Mujibur Rahman Memorial Trust marking the birth centenary celebration of Bangabandhu.

Speaking on the occasion, the PM said, “I don’t want to repeat what you’ve said already. I hope that the single digit interest rate will be implemented. If not, there won’t be desired investment in the country while trend of investment will also be in peril.”

Sheikh Hasina went on saying, “I’ve fulfilled all that you’ve (BAB) demanded earlier, but you didn’t live up to your commitment. I hope this time there won’t be any breach of commitment, and hope you’ll implement it.”

“The government cannot develop the country alone, the private sector will also have to come forward to this end,” she said.

Sheikh Hasina said her government had to face many obstructions while going to allow the private banks.

“There were objections from those who played a role in stopping funding of the Padma Bridge … they questioned that what will happen by giving so many banks as the country’s economy is not so big?” she said.

“But my reply at that time was that now the economy is not big. But it will be huge one day,” she continued.

Sheikh Hasina said she had offered many people to set up banks to pave the way for trade and commerce.

While talking about investment, she said: “Why we speak about only the foreign investment. The countrymen have an ability to make investment … we’re establishing 100 economic zones and the people can invest there.”

The PM said her government wants to build Bangladesh in such a way so that it does not need to look behind.

“We want the country’s irresistible advance to continue …. we want to take Bangladesh in such a position so that it never nosedives,” she said.

She went on saying: “The Bangalees can say with pride by going anywhere of the world that our country is Bangladesh… we’re Bangalees and we’ve a dignity.”

Sheikh Hasina said Bangalee nation fought the Liberation War with arms and earned victory under the leadership of Bangabandhu.

“We’re a victorious nation and we’ll always move by keeping our head high,” she said.

The premier said she has nothing to gain personally and she feels proud of being a daughter of Bangabandhu.

“I want to remain alive as Bangabandhu’s daughter and he is the inspiration of all my works,” she added.

The PM said ill efforts were made after 1975 to erase the name of the Father of the Nation.

“It has been proved that nobody could wipe out the name of Bangabandhu,” she said.

Extending her sincere thanks to the BAB for its donation for Bangabandhu Memorial Trust, the PM said the nation is going to celebrate the “Mujib Barsho” marking the birth centenary of Bangabandhu.

“Such days we had to pass that we never thought we could celebrate the birth centenary of the Father of the Nation. But by the grace of the Almighty and due to mandate of the people we’re celebrating it and we’ll also utilise your donation for this purpose,” she said.

Sheikh Hasina, also the elder daughter of Bangabandhu, said she and her sister have donated everything, including the Dhanmondi 32 number house, to the people.

From the Bangabandhu Memorial Trust, she said, donation and stipends are being given to the distressed people and meritorious students and the families of the Aug 21 grenade victims.

In this connection, she also said a rich and good library will be founded through the trust. “We’ve already purchased a house beside Bangabandhu Bhaban for the library to let the new generations know valuable information,” she said.

The PM also urged all to read books on Bangabandhu like “Aushamapto Attojiboni of Bangabandhu”, “Kaaragarer Rojnamcha” and “Secret Document of Intelligence Branch on Father of the Nation Bangabandhu Sheikh Mujibur Rahman”.

“If anybody reads these historic books, he or she can learn many things about the Father of the Nation, the Language Movement and the Liberation War,” she said.

Sheikh Hasina said a book on Bangabandhu’s visit to China will be published soon. “Bangabandhu would have become a good litterateur if he could write books,” she observed.

Earlier, the prime minister inaugurated a “Mujib Corner” at the head office of the BAB by unveiling its plaque from Ganabhaban.

BAB Chairman Nazrul Islam Mazumdar said the association will set up 64 Mujib Corners in 64 districts on the occasion of the birth centenary of the Father of the Nation to project the true history of independence before the new generations.

Chairmen, managing directors and directors of different private banks were present on the occasion.