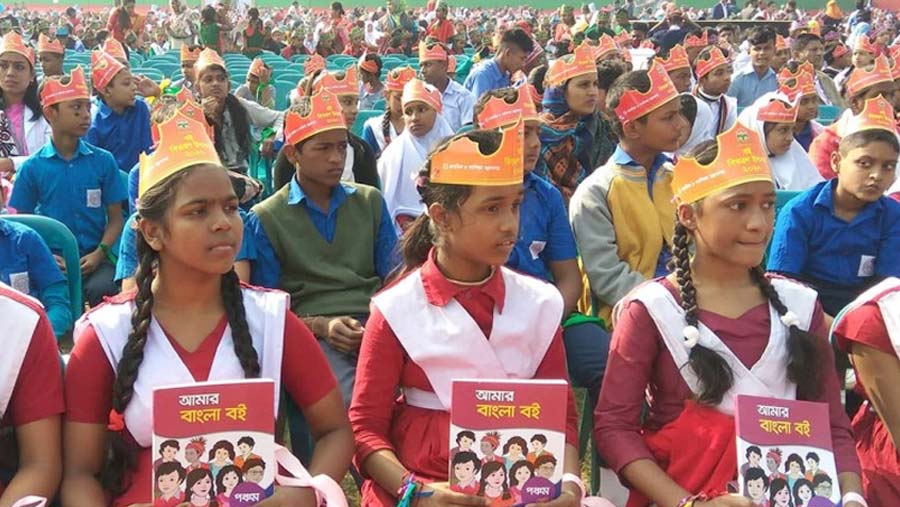 Around 4.26 crore school-going children celebrated Textbook Festival across the country Wednesday (Jan 1), receiving free textbooks for their new classes on the first day of the New Year. This year, about 35,31,44,554 textbooks were distributed among 4,26,19,865 primary and secondary levels students through textbook festivals across the country for the academic year 2020.

Earlier on Tuesday, Prime Minister Sheikh Hasina formally inaugurated free textbook distribution programme for the academic year 2020 through a ceremony at her Ganabhaban residence in the capital, local media reported.

The Primary and Mass Education Ministry arranged a function on central playground of Dhaka University to observe the textbook festival while about 5,000 students and around 600 teachers of the city’s 241 primary schools participated.

Chairman of Parliamentary Standing Committee on Primary and Mass Education Ministry Mostafizur Rahman attended the function as the chief guest with Mass Education Secretary Md Akram-Al-Hossain in the chair.

Students were seen delighted to get their new textbooks as the textbook distribution festivity added a new dimension to their ecstasy on the New Year day.

Hundreds of school children wearing school uniforms were seen with their guardians at the Central Playground of Dhaka University holding new textbooks at another festival.