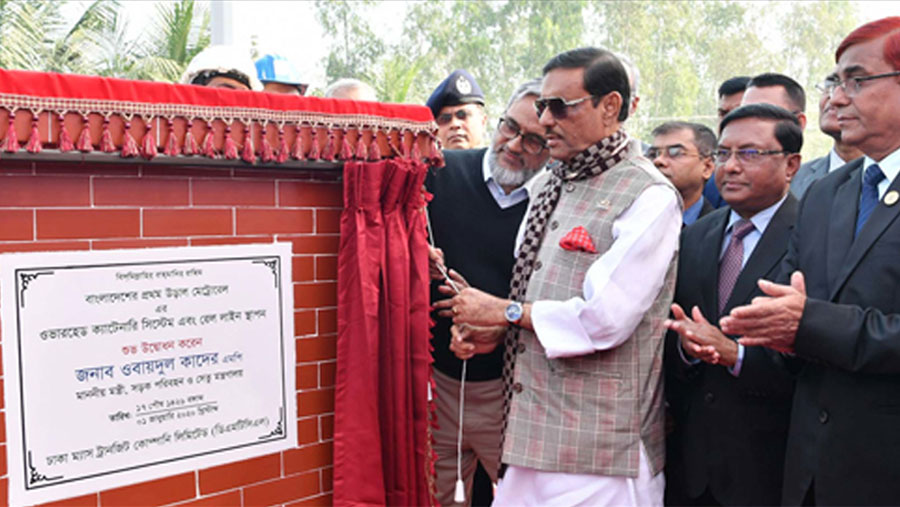 “Already 8.5 km of the project has become visible. The construction work of Mass Rapid Transit (MRT) Lines 1 and 5 with 13 km underground rail is set to begin soon.”

“The government is planning to officially inaugurate MRT Line 6 (From Uttara to Kamalapur) on Dec 16, 2021 to mark the golden jubilee of independence of Bangladesh”, he said.

The minister also said six Metro Rail Projects will be completed by 2030.

While asked about other ongoing mega projects Quader said, “Through integrated planning, we are progressing rapidly. All the mega projects will be completed within the stipulated time.”

Road Transport and Bridges Secretary Md Nazrul Islam and senior officials of the Bangladesh Road Transport Authority (BRTA), and Metro Rail Project were also present, among others, at the inauguration programme.

The metro rail project, the first of its kind in the country, is being implemented by the state-owned Dhaka Mass Transit Company Limited (DMTCL).

According to the DMTCL authorities, electric lines will be installed along with the metro rail lines. There will be a total number of 16 stations, starting from the first station at Uttara Diabari named as ‘Uttara North’.

The Metro Rail is projected to carry 60,000 passengers per hour by traveling the entire route of 20 km in less than 40 minutes.