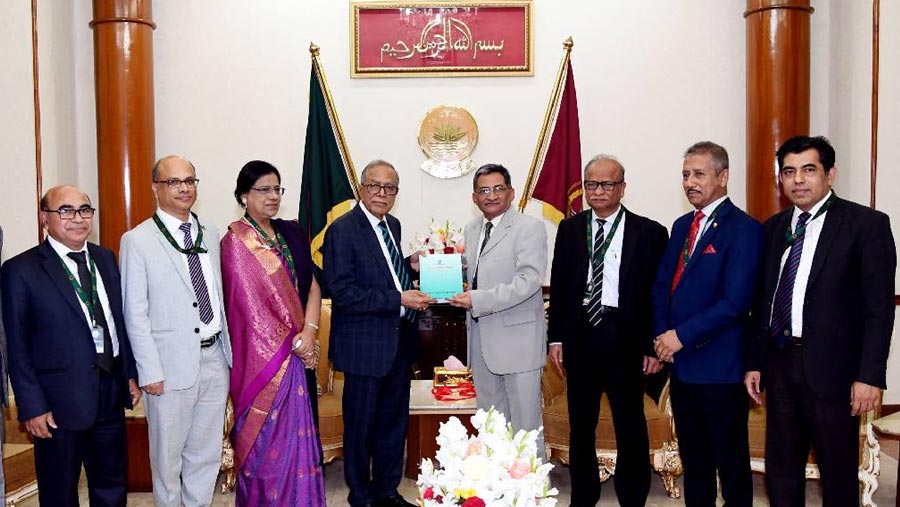 President Md. Abdul Hamid on Sunday (Dec 29) called for modernising Bangladesh’s higher education system and making it time-befitting. The President said this while a delegation of University Grants Commission (UGC), led by its Chairman Kazi Shahidullah, submitted UGC’s Annual Report-2018 to him at Bangabhaban.

Briefing reporters after the meeting, the President’s press secretary said the UGC Chairman appraised President Hamid about various aspects of the report and informed him about the overall activities of the Commission.

Shahidullah said they are planning to introduce unified system to appoint Vice-Chancellor, Pro-Vice-Chancellor and registrar. He said the Commission has taken the strategic plan to increase the skill of teachers.

As part of the plan, teachers will be given “higher and necessary training at home and abroad”, he added.

UGC Chairman Shahidullah said they plan to establish a research centre which will be the hub of time-befitting and standard research.

Welcoming UGC's different initiatives, the President advised it to play an effective role to ensure the quality of education and good atmosphere for education.

He also urged to follow global standard in choosing academic curricula for the graduates.

The UGC chairman informed the President about the first-ever uniform entry test of seven agricultural universities held on Nov 30. He said the introduction of the uniform test has reduced the sufferings and financial losses of the candidates and their parents.

The UGC chairman also sought directives and all-out cooperation from the President to implement their initiatives.

Secretaries concerned to the President's Office were present during the meeting.