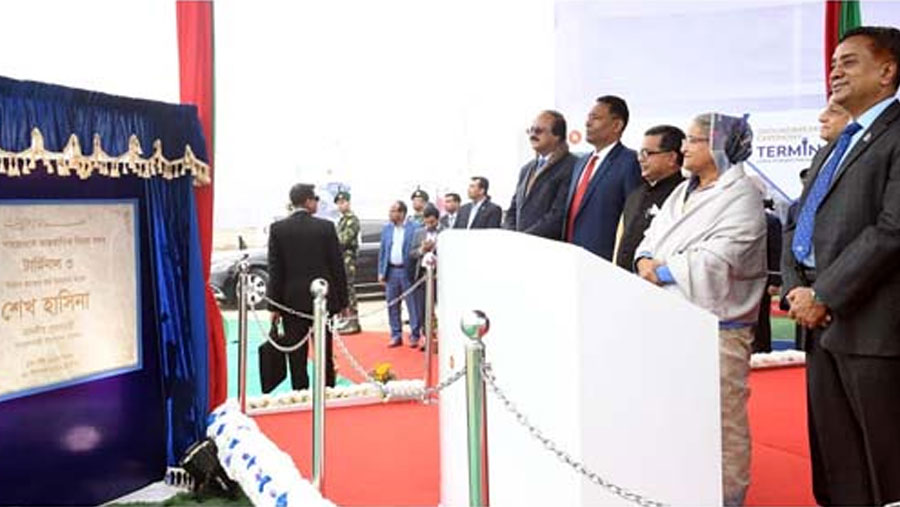 Prime Minister Sheikh Hasina today inaugurated the much-awaited construction work of ‘Third Terminal’ of Hazrat Shahjalal International Airport (HSIA) in the capital aimed at increasing carrying passenger and cargo capacity manifolds. The PM opened the construction work of the third terminal of HSIA by laying its foundation stone this morning.

“After the construction of the third terminal, the HSIA will be the most modern airport in the region… 12 million additional passengers will be benefited annually after building this terminal,” State Minister for Civil Aviation and Tourism Md Mahbub Ali told a press briefing on Friday (Dec 27), local media reported.

The third terminal will be built at a cost of Taka 21,300 crore of which the government will provide Taka 5,000 crore and the rest to be funded by Japan International Cooperation Agency (JICA).

Mitsubishi and Fujita of Japan and Samsung of Korea were awarded to construct the third terminal under a consortium, Civil Aviation Authority, Bangladesh (CAAB) official sources said.

The government will float an open tender to select an efficient company for ‘ground handling’ task of the new terminal, he said.

The project with an estimated cost of Taka 13,610.47 crore got the nod of the Executive Committee of National Economic Council (ECNEC) on Oct 24, 2017.

However, the cost of the project enhanced subsequently due to expansion of some of the project works, including setting up of a separate cargo house, the official sources said.

“The cost increased as we amplified volume of work that includes separation of export and import cargo houses and construction of new VVIP terminal,” Haque told media on Thursday.

The senior secretary said additional work as well as the extra cost were planed and calculated as per consultation of JICA’s fact finding mission along with CAAB’s Japan-based consultant firm – the Nippon Koi.

“The project’s additional fund was approved by the ECNEC on Dec 10”, Haque said.

The new international passenger terminal building is set to have a floor area of roughly 22.5 lakh square feet whereas the exiting two terminals of the HSIA have space of around 10 lakh square feet together.

The HSIA’s expansion is set to increase the airport’s annual passenger handling capacity from the current eight millions to approximately 20 millions, and the cargo capacity from 200,000 tonnes to 500,000 tonnes.

The construction work is expected to take 48 months.

According to the project design, the third terminal will have 12 boarding bridges and conveyer belt each.