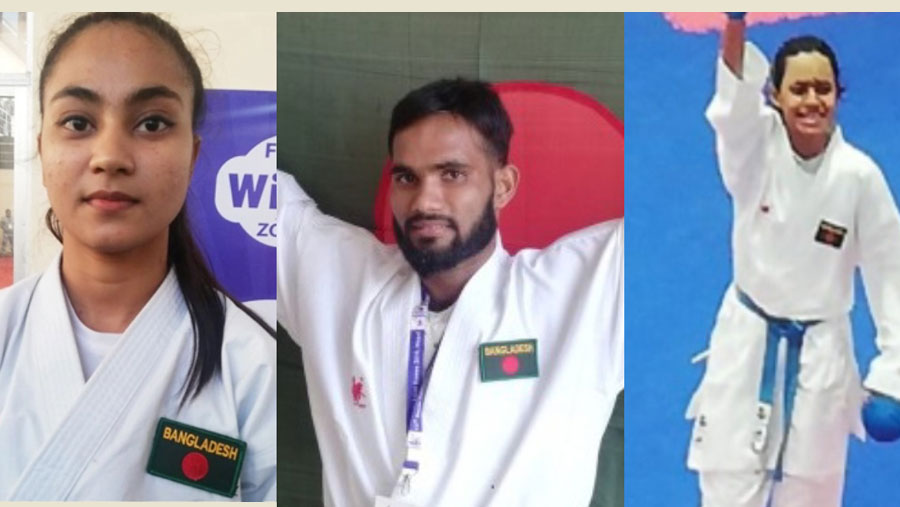 Bangladesh’s athletes clinched three more gold medals in kumite events of karate of the 13th South Asia Games on the third day of the 10-day regional meet at the Karate Hall of Satdobato Sports Complex in Lalitpur, Nepal on Tuesday (Dec 3).

With the feat, the gold medal tally of Bangladesh has stood at four till Tuesday, equaling the total gold medals bagged in the last edition of the games.

Mohammed Al Amin of Bangladesh Army clinched the second gold medal and the day’s first one for Bangladesh in the 60-kg weight category of men’s kumite event of karate beating his Pakistani rival Zafar by 7-3 points in the final in the morning.

Piya lifted the day’s second gold medal for Bangladesh in the women’s 55-kg weight category of kumite eliminating her Pakistani rival Kayser Sana by 4-3 points in the final.

She defeated Manish Chowdhury of Nepal by 2-1 points in the semifinal on the day.

Antara - who won the first medal, a bronze, for Bangladesh on Monday -  lifted the third gold medal in the women’s 61-kg weight category of kumite event beating Anu Gurang of Nepal by 5-2 points in the final.

Bangladesh, which clinched one gold, two silvers and 13 bronze medals on Monday, remained in the fifth slot of the seven–nation games clinching four gold, seven silver, and 21 bronze medals till Tuesday evening.