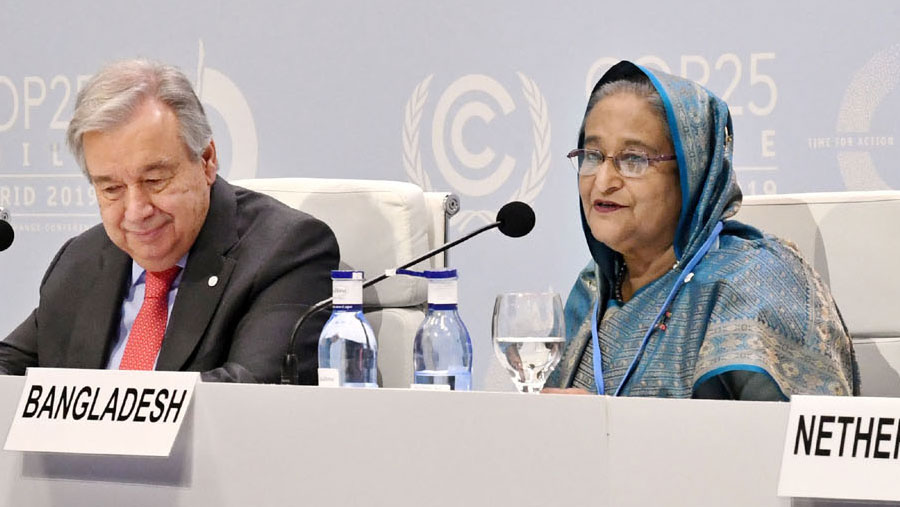 Prime Minister Sheikh Hasina on Monday (Dec 2) urged all nations to join their hands to combat climate change to secure the children’s future as the phenomenon emerged as an “existential threat” for every country, exposing some of them like Bangladesh to grave dangers.

“We are possibly confronting the gravest global challenge of our time,” the premier said addressing an event of the UN Climate Change Conference (COP25) being held in the Spanish capital.

She added: “Our children will not forgive us if we fail to ensure their future. Every moment, the cost of our inaction is devastating every living person on earth. The time to act is now.”

Sheikh Hasina also feared that the situation exposed the globe to the “most important crossroad of human history”.

The climate conference drew world leaders as it was opened on Monday at Feria de Madrid, the largest exhibition complex in Spain and one of the most important venues in Europe, in the morning, where the Bangladesh premier addressed an event titled ‘Action for Survival: Vulnerable Nations’ COP25 Leaders’ Summit’ at UN Climate Change Conference (COP25).

The premier said climate change is a stark reality for the world and it has now caused irreversible damage to the human life and environment, ecology and natural resources.

“Since the Earth Summit in 1992, we have not been able to secure much progress in the reduction of greenhouse gases as their emission is still on the rise. This trend is now unsustainable for the Earth.”

“We, the vulnerable countries, suffer the most due to our limited coping capacities and specific geographical features. We are bearing the brunt of the damage though we made negligible or no contribution to the menace,” she said.

Sheikh Hasina said this constitutes a serious injustice and must be acknowledged by the global community.

The PM said global climate landscape has changed considerably since the Forum first met in November 2009 in Male. Unfortunately, the progress under the UNFCCC process is very slow and largely inadequate.

Sheikh Hasina said there is still hardly any move to support nationally determined adaption initiatives undertaken especially by our vulnerable countries. “Different funds created for different purposes lack from availability of the required capital,” she said.

The PM said often direct and easy access to funds and technology along with conditions and criteria seem to favour mostly the countries that already have acquired greater capacities.

“We now have a situation where the most vulnerable countries, which deserve the highest level of priority, are failing to access whatever support that is being realised,” she said.

She said creation of a new Climate Vulnerable Forum (CVF) and V20 Trust Fund and possibility of having a new Special Rapporteur on climate change would be great success.

The premier said, “CVF and V-20 are great examples of South-South and Triangular cooperation and we want to further build on the current accomplishments.”

“We are also looking towards the 2020 Climate Adaptation Summit in the Netherlands to strengthen our adaptation efforts.”

Sheikh Hasina said, “Bangladesh is ready to take the responsibility of the Presidency of the Forum if the members will kindly agree to honour us with this task.”

“The success of the Presidency of the Marshall Islands and the personal commitment of Madam Heine will act as our encouragement,” she said.

The PM said with over 1.1 million Rohingyas from Myanmar causing all sorts of environmental havocs, Bangladesh already has the firsthand experience of the worst kind of environmental catastrophe.

“We must therefore establish a set of criteria to prioritize vulnerable countries based on their risks, impacts and lack of coping capacities … we also want to keep the climate change support and the regular development finance strictly separate,” she said.

On mitigation, Sheikh Hasina said the vulnerable countries see extreme reluctance on part of major emitters. “This may wreck the international climate regime and put our countries at the risk of peril. Hence, we should not hesitate to demand accountability for the inaction,” she said.

The PM said it is widely accepted that the gravest effect of climate change may be on human migration and extreme weather events are already displacing many more people than violent conflicts.

“We must work towards correcting this imbalance … we must appreciate that migration could be an effective adaptation strategy, as we focus on enhancing adaptation capacities of affected communities,” she said.

Hence, she added, relocation and protection of displaced persons need due focus in global discourse to ensure their protection.

“We need to commence discussion on the creation of an appropriate framework to address the needs of people displaced due to climate change,” she said.