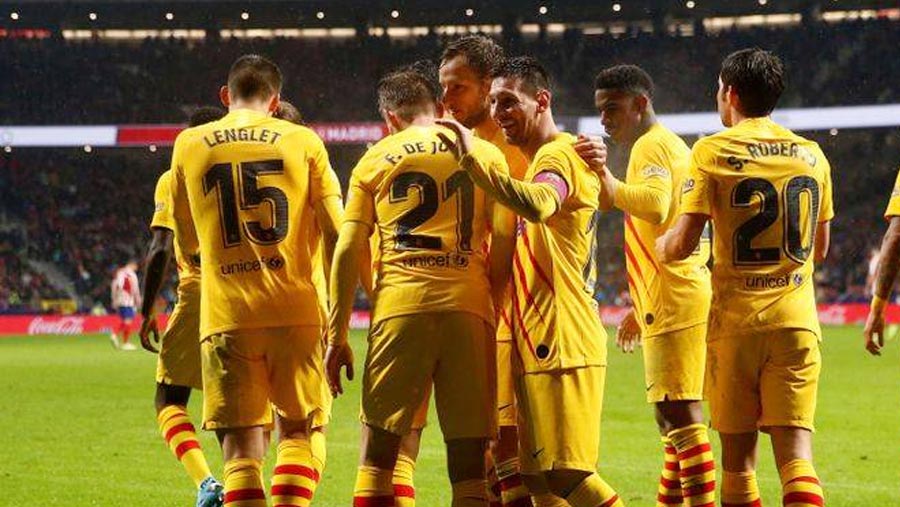 Lionel Messi delivered a major boost to Barcelona's La Liga title hopes by scoring a late winner in a 1-0 victory at Atletico Madrid on Sunday (Dec 1). Messi is the favourite to win a record-breaking sixth Ballon d'Or in Paris on Monday and he came up trumps again for Barca at the Wanda Metropolitano, where an even contest looked destined to finish goalless. The Argentinian's 86th-minute strike, after a neat one-two with Luis Suarez, keeps Barcelona level on points with Real Madrid at the top of the table while leaving Atletico with a mountain to climb if they are to rejoin the race.

Lionel Messi scored a sublime late winner as champions F.C. Barcelona defeated Atletico Madrid to return to the top of La Liga. Messi curled sweetly into the corner of Jan Oblak's goal from the edge of the penalty box with four minutes remaining for his 11th goal in 10 games.

Barca climb from third to move above Real Madrid on goal difference.

It had appeared the visitors would be made to settle for a point at the Wanda Metropolitano in Madrid after centre-back Gerard Pique's header had hit the crossbar and Oblak prevented Ivan Rakitic from finding the breakthrough.

Messi's late winner from a perfect Luis Suarez perfect lay-off means Atletico have failed to win any of their last 19 league matches against Barcelona, a run stretching back to February 2010.

And while defeat was perhaps harsh on Simeone's side, the 2013-14 champions find themselves six points adrift of the leaders in the Spanish top flight.