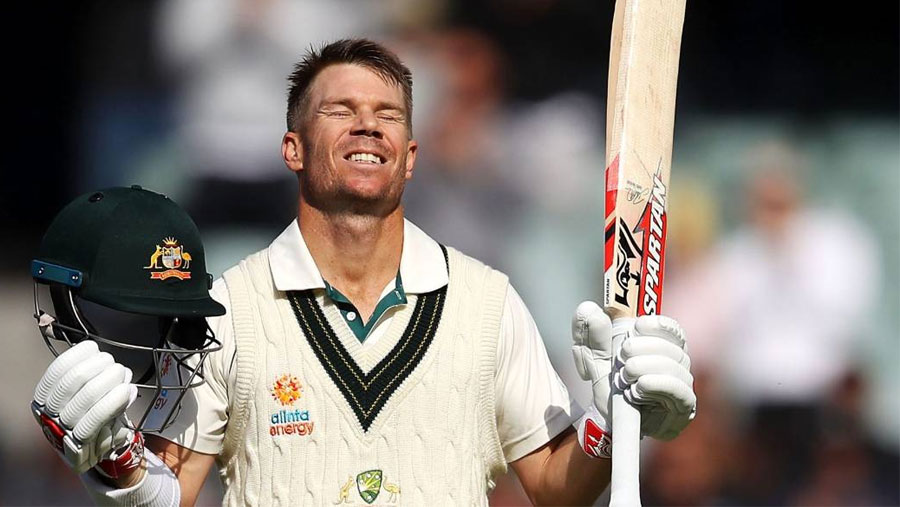 Warner moved to the magical 300 milestone at 5.10 p.m. local time on Saturday (Nov 30), the first Australian to do so since Michael Clarke posted 329 not out against India almost eight years ago.

He brought up his 300 from the 389th ball he faced, clubbing Mohammad Abbas to the mid-wicket boundary and celebrating in trademark fashion with an audible roar, an exuberant leap in the air and vigorous acknowledgement of his teammates and family in the Adelaide Oval members' area.

Attention then turned to how far Warner could go, with the all-time Test world record score of 400 not out set by Brian Lara in 2004 well within reach. But skipper Tim Paine had a different idea and waited until Warner moved past 334, Bradman's highest Test score that had stood alone as the Australian benchmark for 68 years until Mark Taylor equalled it in 1998.

When Warner clipped a single into the leg-side from the 418th ball he faced to move to 335 not out, Paine declared Australia's innings closed at 3-589.

In all, Warner batted for more than nine hours and struck 39 fours and a six.

He joined Bradman (twice), Matthew Hayden, Taylor, Bob Simpson, Bob Cowper and Clarke as Australians to have scored a Test triple ton and is the 27th man overall to reach the mark, the most recent of which was India's Karun Nair in 2016.

Warner's knock is the highest-ever Test score at the Adelaide Oval, surpassing the unbeaten 299 that Bradman scored against South Africa in 1932.

Warner is also just the second man to score a triple hundred in a day-night Test, joining Pakistan skipper Azhar Ali, who has watched the entirety of the left-hander's demoralising knock from his fielding position in this Test.

Warner's innings here is his third century of the international summer having posted 154 in the first Test last week in addition to his T20 hundred against Sri Lanka last month.

It's been a remarkable response to a horror Ashes campaign this year, his first Test series since returning from a 12-month ban, where he managed just 95 runs in 10 innings.

Warner's triumphant return home has widened the gap between his Test record in Australia compared to overseas. At the time he brought up his triple hundred, Warner's home Test average was 65.84 compared to 34.50 away and 17 of his 23 Test hundreds have come in Australia.