None would be spared if found involved in graft, terrorism: PM 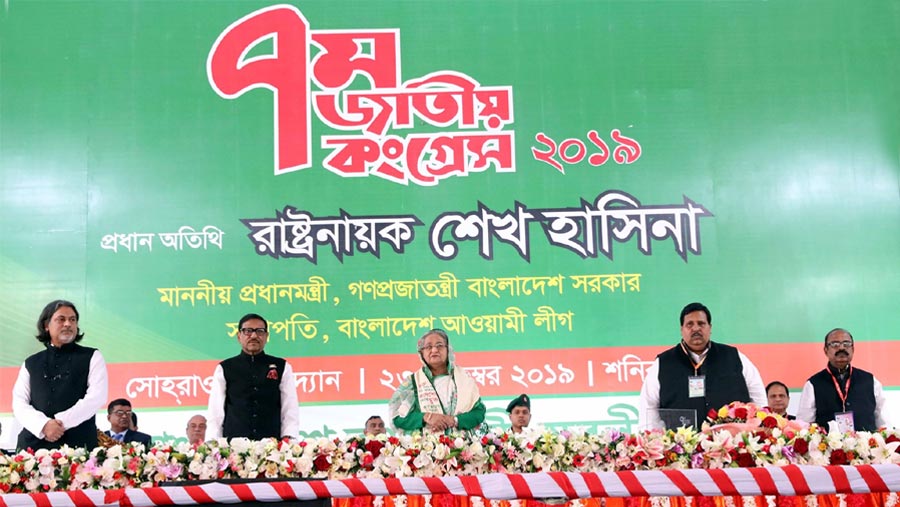 Calling upon the youths, particularly the Jubo League leaders and activists, to follow the ideals of Bangabandhu, Prime Minister Sheikh Hasina on Saturday (Nov 23) reiterated that the ongoing drives against terrorism, corruption and drugs would be continued.

“We have been working hard round-the-clock for the welfare of the people… if anyone is found involved with terrorism, militancy, drugs and corruption, he or she wouldn’t be spared. I will show no sympathy for them,” she said while opening the 7th national congress of Bangladesh Awami Jubo League at the historic Suhrawardi Udyan in Dhaka, local media reported.

Sheikh Hasina called upon the youths to engage themselves in building the country being imbued with the mentality of patriotism and sacrifice. It is vital to utilize the merit, power and creativity of the youth for building anything, she opined.

The premier urged the youths to stay away from terrorism, militancy, narcotics, and corruption, saying, “One can be rich through corruption, but don’t get honour as well as love and affection from anyone.”

In order to become a leader, one should stick to ideals alongside having the mentality to do politics for the welfare of the people and the country without thinking much for personal gain, she said.

The premier asked the leaders and activists of the Jubo League to follow the ideology of Father of the Nation Bangabandhu Sheikh Mujibur Rahman to be a politician.

“Read attentively two books – “Oshomapto Attojiboni” (Unfinished Memoirs) and “Karagarer Rojnamcha” (Diary in Jail) – written by the Father of the Nation and “Secret Documents of Intelligence Branch on Father of the Nation Bangabandhu Sheikh Mujibur Rahman” to know how Bangabandhu sacrificed his life for the welfare of the people keeping him above greed and lust,” she advised the Jubo League leaders.

Referring to the contribution of Juba League in all the democratic movements, the premier said, “This Jubo League will have to be developed in such a way so that it would not earn any bad name, rather can move on with ideology and can work for the welfare of the country.”

Earlier, Sheikh Hasina, also the president of the ruling Awami League, inaugurated the triennial national council of Bangladesh Awami Jubo League, by hoisting the national flag and releasing pigeons and balloons at the venue at 11:00 in the morning.

A minute’s silence was observed as a mark of profound respect to the memory of the martyrs of all democratic movements and Father of the Nation Bangabandhu Sheikh Mujibu Rahman and the four national leaders.

Over 28,000 councilors from 77 organising districts across the country are taking part in the triennial national congress of the Jubo League.

They will elect their new leaders at the council session at Institution of Engineers, Bangladesh (IEB) auditorium here in the afternoon.

Shahid Sheikh Fozlul Haque Moni had formed the youth organization Bangladesh Awami Jubo League on Nov 11 in 1972 at the directive of Father of the Nation Bangabandhu Sheikh Mujibur Rahman.

Spelling out various programmes taken by her government for employment generation, Sheikh Hasina said, “None will remain unemployed in the country as we have taken various measures, including establishing 100 special economic zones as well as opening up the private sector.”

The premier said the economic zones will attract local and foreign investments and generate huge employments.

She said her government’s initiatives for setting up 5800 digital centres and 8500 digital post offices and “My House, My Firm” project across the country will also create huge employments.

The premier requested the foreign job-seekers to go abroad after knowing everything about the job status so that they, particularly the women, do not fall victims to fraudulence.

“People can go abroad for jobs after taking loan from Karmosangsthan Bank without deposit,” she said, adding that the bank was established by the Awami League government.

She came down heavily on the BNP for comparing Begum Khaleda Zia with world famous leader Nelson Mandela as the BNP chairperson has been serving jail for corruption while Mandela suffered in jail for the people’s cause.

In this context, she mentioned that Khaleda Zia’s elder son Tarique Rahman has been awarded jail terms in the 10-truck arms haul case, Aug 21, 2004 grenade attack case and graft cases while her younger son Arafat Rahman Koko for graft.

The premier questioned, “If the BNP is so popular, why did the BNP-Jamaat alliance get only 29 seats in the general election of 2008?”

Elaborating various steps Bangabandhu had taken for rebuilding the war-ravaged nation, Sheikh Hasina said the Father of the Nation did everything in every field.

“He (Bangabandhu) established all organizations necessary for the country, and framed all relevant laws and time was needed for him to implement those laws,” she said.

Sheikh Hasina said coming to power after 21 years, her government is trying its best to complete the unfinished task of Bangabandhu to turn Bangladesh into a developed and prosperous country free from corruption and huger.

The premier said her government has been following the path of Bangabandhu to make the country a developed and prosperous one in the South Asia by 2041, adding, “Bangladesh is now considered the role model for development due to the relentless work of her government in the last one decade.”

She hoped that the next generation will celebrate the centenary of the country’s independence in 2071 in a developed and prosperous country.