PM off to Kolkata to watch BD-India second Test 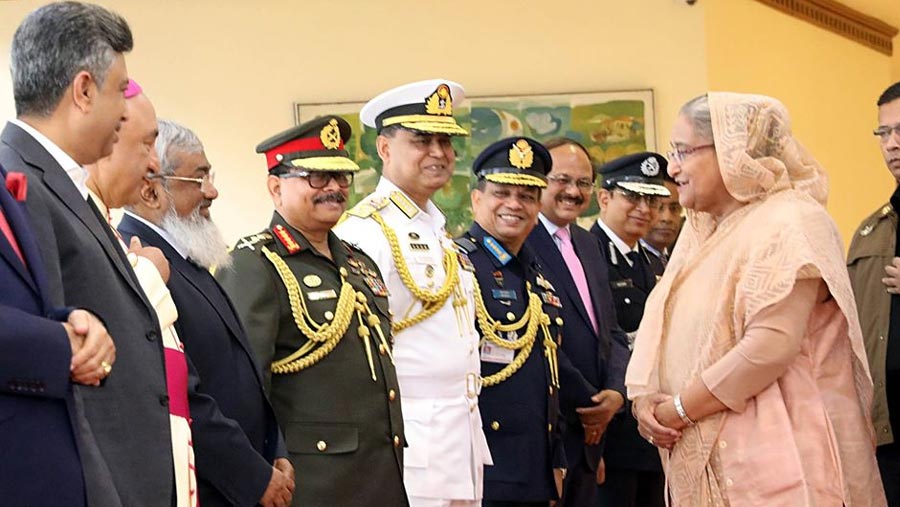 Prime Minister Sheikh Hasina left Dhaka this morning for Kolkata on a daylong official visit to watch the second cricket Test of the two-match Test series between Bangladesh and India that begins at Eden Gardens at 1:30 p.m. (BST). A Biman Bangladesh Airlines special flight carrying the PM and her entourage members took off from Hazrat Shahjalal International Airport at 10:15 a.m., local media reported.

The flight will land at Netaji Subhas Chandra Bose International Airport in Kolkata at 10:40 a.m. (India time). Bangladesh high commissioner to India Syed Moazzem Ali will receive the premier at the airport.

After the reception at the airport, a ceremonial motorcade will escort the PM to Hotel Taj Bengal, Kolkata where she will be staying during her short visit.

Sheikh Hasina will go to the Eden Gardens around 12:30 p.m. local time where she along with West Bengal Chief Minister Mamata Banerjee will ring the ceremonial bell for the opening of the Test match between Bangladesh and India.

After watching the first session of the second Test match, the PM will return to her place of residence. Sheikh Hasina will again go to the stadium in the evening.

After the first day’s match, she will join a short cultural function that will be followed by a felicitation programme to be arranged by the Cricket Association of Bengal at the ground of the Eden Gardens Stadium.

Earlier, President of Board of Control for Cricket in India (BCCI) Sourav Ganguly invited PM Sheikh Hasina and her Indian counterpart Narendra Modi to watch the second Test match in Kolkata.

Bangladesh and India will play their maiden day-night Test match where pink ball will be used for the first time of any Test cricket match of the two neighbours.