PM urges all to work for building prosperous Bangladesh 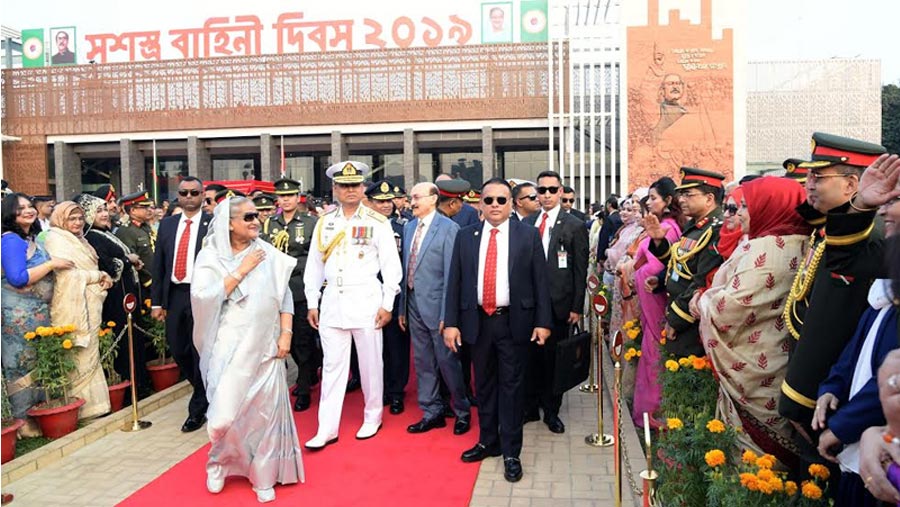 Prime Minister Sheikh Hasina on Thursday (Nov 21) called upon all to accomplish their respective duties sincerely to make Bangladesh a developed and prosperous country.

“Our economy is strong enough. So, we want to build our country by ourselves and I want all to work from their respective positions with sincerity to build the country,” she said, addressing a reception at Senakunja of Dhaka Cantonment marking the Bangladesh Armed Forces Day, local media reported.

The premier said she wants to advance the country without begging anything to anyone and bowing down to anybody, rather moving forward with the head high being a victorious nation of the Liberation War.

Bangladesh is one of the world’s fifth countries with regards to the economic development and is currently implementing 90 percent of the development works with own finance, she added.

Expressing hope that the armed forces would play an effective role to continue the democratic trend with the sense of the highest responsibility, she said, “I firmly believe the commitment of the armed forces will continue for the noble cause of building the country by maintaining the chain of command being responsible to the Constitution.”

The PM said there will be economic development in the country if peace and security prevail.

“So, the ongoing drive against terrorism, militancy and corruption will be continued as we are striding so that the people of the country can live in peace,” she continued.

The premier appreciated the armed forces for their successes to attain universal recognition for its honesty, sincerity, efficiency and multifaceted services for the welfare of the people.

In this context, the premier appreciated the role of armed forces for successfully handling the recent cyclonic storm “Bulbul”. PM’s Security Affairs Adviser Major General (Rtd) Tarique Ahmed Siddique and chiefs of three services stood beside the premier as she addressed the reception.

The premier later exchanged pleasantries with the army officials and their family members, diplomats and other guests.

She earlier inaugurated the extended and reconstructed Senakunja.

Sheikh Hasina, also in-charge of the Defence Ministry, said the role of the armed forces in assisting the forcefully displaced people of Myanmar has also been lauded highly at home and abroad.

“The armed forces alongside with the local administration, the BGB (Border Guard Bangladesh) and other law enforcement agencies have been working to ensure better living of 11 lakh forcibly displaced Rohingyas,” she said.

Wishing constant success of the Bangladesh Armed Forces, the premier said her government has taken substantial plans to make it a competent force of the twenty first century.

The prime minister said her government is continuing efforts for training of the members of the army, navy and air force and acquisition of modern technologies and armories aimed at building a strong defense force.

“We have fixed our target to transform the armed forces into a modern and time-befitting force in the Forces Goal-2030 formulated in line with the Defence Policy-1974 by Father of the Nation Bangabandhu Sheikh Mujibur Rahman” she said.

The premier said they are working in phases to reconstruct and modernise the three forces in accordance with the forces’ goal.

Spelling out the initiatives to make each of the force time-befitting, she said, “We would have to go for modernization of the forces to make those capable to cope with the time as the trend of using technology is increasing.”

The premier said after assuming office in 1996, her government has been implementing pragmatic steps for strengthening the defense system and development and expansion of the armed forces with purchasing the ultra modern fighter plane MIG-29 for air force and other modern equipment for the three forces.

She went on saying that her government has established three full fledged infantry divisions at Sylhet, Ramu and Patuakhali for Bangladesh army.

The premier said that the government is trying its best to build warships whereas some petro crafts have already been manufactured.

In this context she said her government has already established medical college, dental college, engineering institute, technical and training institute for the welfare of the armed forces.

Pointing out her family bond with the armed forces, the Prime Minister said her brother Sheikh Kamal and Sheikh Jamal were freedom fighters, who had joined the Bangladesh Army after the War of Liberation.

Her brother Sheikh Jamal was a commissioned officer in Bangladesh Army and her youngest brother Sheikh Russell wanted to be an army officer as he became fascinated with the discipline of the force.

But, bullets of the killers pierced his chest when he was only ten years old, she lamented.

The PM said Bangabandhu had fought for liberating the country with the aim of building a nation free from poverty and hunger, embodying the spirit of the Liberation War.

She said her government wants to build a prosperous Bangladesh as dreamt by the Father of the Nation.