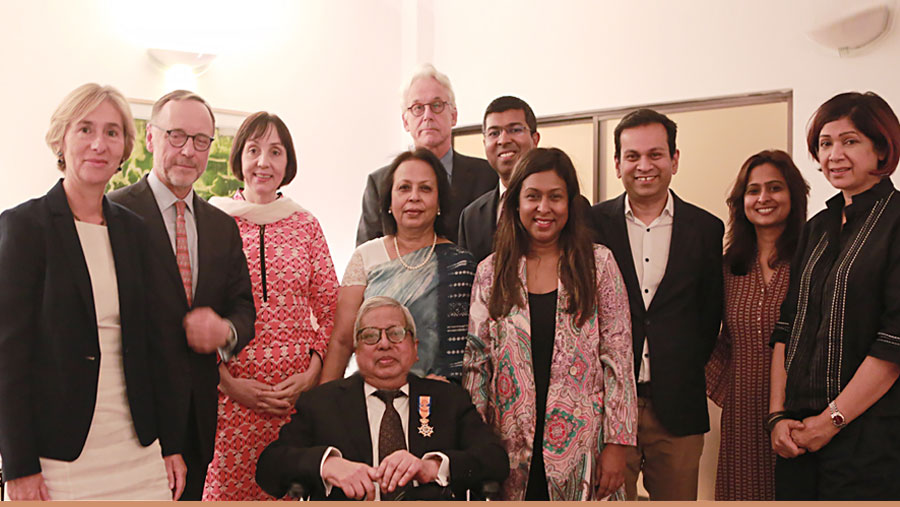 Sir Fazle Hasan Abed KCMG, Founder and Chair Emeritus of BRAC, has been decorated Officer in the Order of Orange-Nassau for his longstanding, dedicated and successful work in alleviating poverty especially of women and children.

Sir Fazle accepted the insignia of the Royal Knighthood bestowed upon him by Mr. Harry Verweij, Dutch Ambassador to Bangladesh, on behalf of King Willem Alexander of The Netherlands.

A brief ceremony took place at Sir Fazle's residence in Dhaka on Wednesday (Nov 20) evening. Sir Fazle's family members along with representatives from the Netherlands embassy were present at the event.

"On behalf of His Majesty the King it is my great honour and privilege to present to you the insignia of Officer in the Order of Orange-Nassau,” Ambassador Verweij said.

Sir Fazle expressed his delight at the acknowledgement by the Dutch Crown. "Being named an Officer in the Order of Orange-Nassau is an immense honour," he said. “The Netherlands has been a great friend and supporter to BRAC over the decades and our connection with the country has deepened since establishing the base of our international operations there 10 years ago. This recognition is a testament to that friendship. As BRAC expands globally, we look forward to working together to advance the causes of people living in situations of poverty and deprivation”.

The ambassador in his speech highlighted Sir Fazle's holistic vision and entrepreneurial approach to poverty alleviation and women’s empowerment. “Sir Fazle has always strived to uphold human dignity, resilience, integrity and inclusion - these values have been at the heart of the successful development of BRAC."

“The fact that, for BRAC, the empowerment of women is not a secondary aim but a guiding principle of all of its programmes and enterprises, is greatly appreciated. BRAC’s anti-poverty work is recognized across the world, including in The Netherlands,” the ambassador further stated. He also mentioned the long-standing and close connection between BRAC and his country.

The Order of Orange-Nassau is awarded for longstanding meritorious service to society, the State or the Royal House of The Kingdom of The Netherlands.