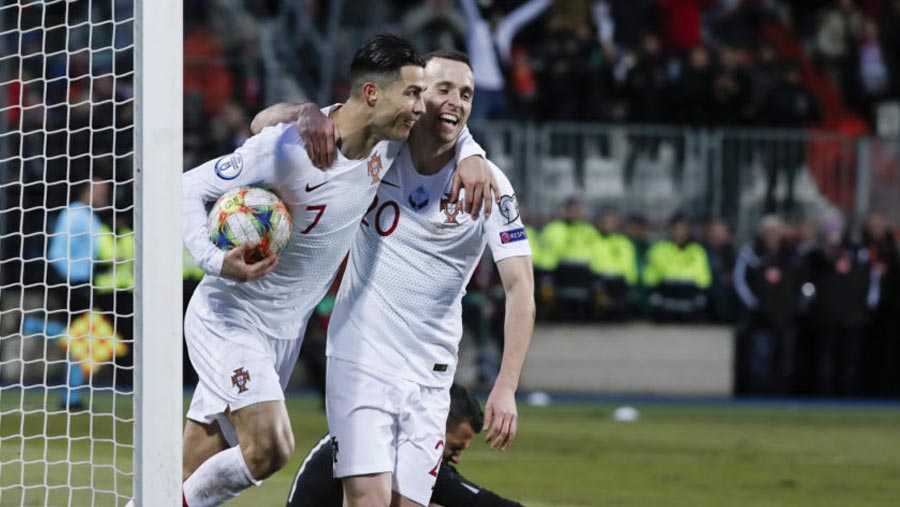 Portugal captain Cristiano Ronaldo scored his 99th international goal as the defending champions edged past Luxembourg 2-0 in difficult conditions away from home to qualify for Euro 2020.

Cristiano Ronaldo scored his 99th goal for Portugal as the defending champions qualified for the UEFA Euro 2020 finals.

The Portugal captain poked the ball over the line in the dramatic closing stages of the match to seal a 2-0 win over Luxembourg -- and put him on the brink of becoming only the second man in history to net 100 international goals.

Midfielder Bruno Fernandes had hit home Bernando Silva's long ball against the run of play to open the scoring.

The 34-year-old Ronaldo has scored his 99 goals in 164 appearances for Portugal, adding to his standing as Europe's top international goal-scorer. Only Iran's Ali Daei has scored more goals in world football with 109 -- a landmark now surely in sight for Ronaldo.

Fittingly, Ronaldo scored his first international goal in the 2004 edition of the Euros, heading in a late effort in a group game against Greece that host Portugal lost 2-1.

While the Juventus star, a winner of five Ballon d'Or awards, continues to chase his remarkable collection of personal records, Portugal will go through to Euro 2020.

The 2-0 win sees Portugal advance from Group B along with Ukraine.