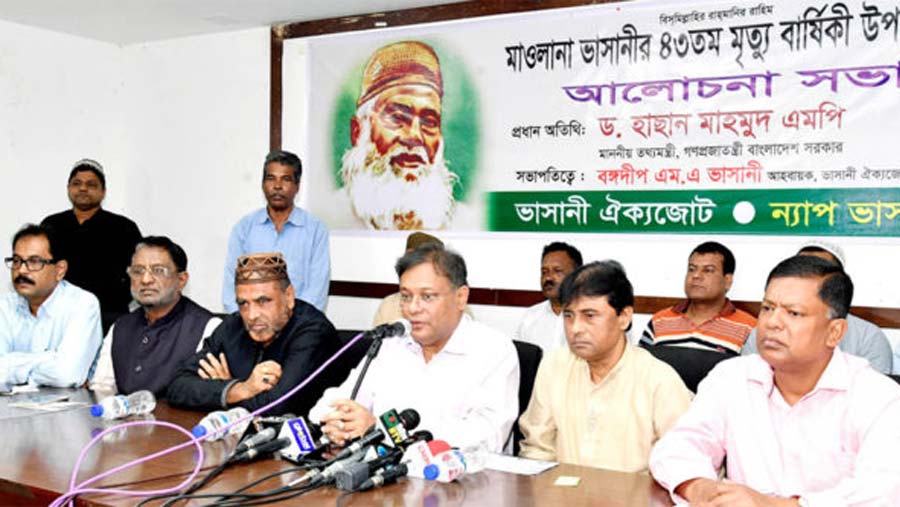 The 43rd death anniversary of legendary politician Maulana Abdul Hamid Khan Bhashani was observed on Sunday (Nov 17) across the country with due respect. Popularly known as ‘Majlum Janoneta’, the leader of the downtrodden, Maulana Bhasani, passed away on Nov 17 in 1976.

In observance of the day, the Bhashani Sriti Sangsad arranged a discussion and doa mahfil at Bhashani Bhaban in the city’s Naya Paltan area.

The death anniversary of Maulana Bhashani was also observed in a befitting manner amid different programmes in Tangail.

To mark the day, people of different strata paid glowing tributes to Bhashani by placing wreaths at his grave at Santosh in Tangail.

A Doa and Milad Mehafil was arranged seeking eternal peace of his departed soul on the premises of his grave. Destitute people were served foods on the occasion.

Maulana Bhasani Science and Technology University Vice-Chancellor Professor Dr M Alauddin along with other senior teachers, students and employees of the university and family members of Maulana Bhasani placed wreaths at his grave.

Maulana Abdul Hamid Khan Bhasani, born in 1880 in Dhangara in Sirajganj, was the son of Haji Sharafat Ali Khan. He gained immense popularity among peasants. He is regarded as the proponent of secular and left-leaning politics in Bangladesh.

Bhasani played a very significant role in the 1969 movement against Pakistan, which eventually led to the collapse of the Ayub regime and release of Bangabandhu and other co-accused in the so-called Agartala conspiracy case.