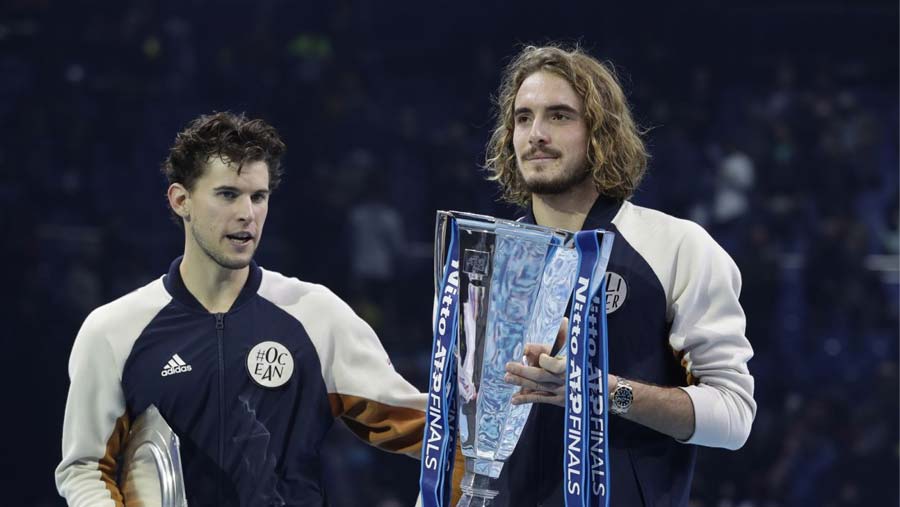 Three years after coming to the ATP Finals as a hitting partner to the top pros, Stefanos Tsitsipas is leaving the tournament as champion. Tsitsipas rallied to beat Dominic Thiem 6-7 (6), 6-2, 7-6 (4) on Sunday (Nov 17) for the biggest title of his career, becoming the youngest champion at the season-ending event in 18 years.

Stefanos Tsitsipas came from a set down to beat Dominic Thiem on a thrilling final-set tie-break and become the youngest winner of the ATP Finals in 18 years. The Greek, 21, won 6-7 (6-8) 6-2 7-6 (7-4) to claim the biggest title of his fledgling career.

Thiem, 26, who edged a tight first set, fell away in the second and the start of the third before fighting back. But Tsitsipas forced a tie-break, and then won it, at a raucous O2 Arena.

He collapsed to the floor after Thiem put a forehand return out on the first match point before the pair embraced at the end of a two-hour 35-minute battle, with the Greek kissing his beaten opponent on the shoulder.

Tsitsipas is the youngest winner of the season-ending championships since Australia's Lleyton Hewitt in 2001 and claims prize money of just over £2m.

"It's been a rollercoaster. Holding this trophy is amazing," the world number six said.

"It is a dream come true and the best way to end this match.

"I did get nervous at some points in the match but I managed to forget about how I felt and I had momentum in the tie-break, which was really tight.

"My fighting spirit and me constantly trying to push myself to do better got me there in the end."