BD and Nepal to work together on climate change issue 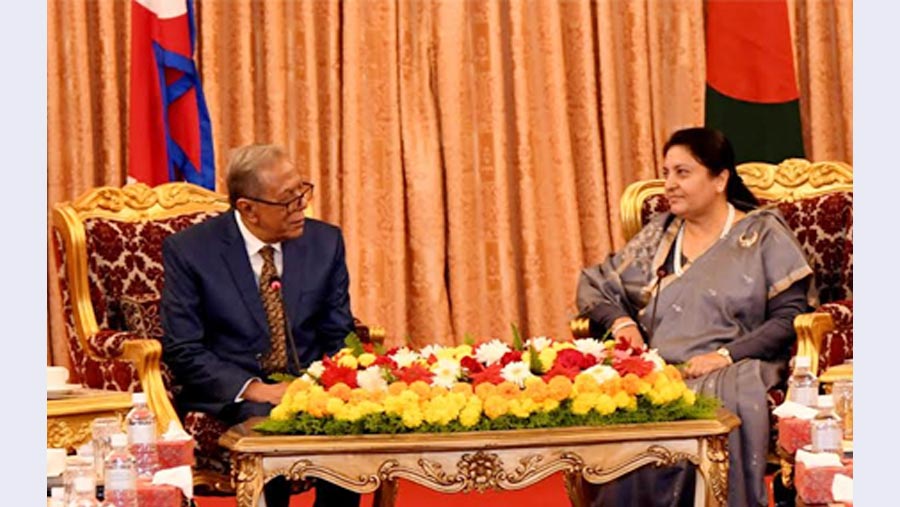 Bangladesh and Nepal would work together to raise strong voice in different international and regional forum about the negative impact of climate change and natural calamities.

Bangladesh President Md. Abdul Hamid and his Nepalese Counterpart Bidhya Devi Bhandari expressed their same opinion during a bilateral meeting at the Sheetal Niwas, the Presidential House of Nepal, on Wednesday (Nov 13) evening.

Both the Presidents expressed their gratitude to each other as the two friendly countries are maintaining a very good bilateral relation since long.

After the meeting, President’s Press Secretary Joynal Abedin told journalists that Dhaka and Kathmandu are very keen to enhance the connectivity in road-rail-water-airways between Bangladesh and Nepal, local media reported.

“Distance between Bangladesh and Nepal are only few kilometers. . . (but) Bangladesh and its people always remain in our heart,” Nepalese President said.

About the issue of expanding air connectivity from Syedpur in Bangladesh to Bhadrapur, Biratnagar or Bhairahawa in Nepal raised by the Nepalese side, President Hamid said Prime Minister Sheikh Hasina herself has made the offer to Nepal earlier. Both the Presidents expressed identical view that both Dhaka and Kathmandu have started working to this end.

During the meeting, Devi Bhandari appreciated the ongoing political stability and development trend in different sectors, including economic, education and socio-culture of Bangladesh.

About Bangladesh’s tremendous development in education, Bidhya Devi said, “There are a good number of universities in Bangladesh and those are providing quality education.”

She thanked the President as Bangladesh government made the Nepalese students’ VISA process easy and long-term basis.

Bangladesh President congratulated the Nepalese people and political leadership for completing the peaceful transition to democracy and successfully completing all the three tiers of elections (local, provincial and parliamentary) in 2017 and thereby completing the process of implementation of the constitution adopted in 2015.

Recalling the moral and material support extended by the people and political leadership of Nepal during the War of Liberation in 1971 with appreciation, Abdul Hamid said Bangladesh honoured 11 distinguished Nepali personalities as “Friends of Bangladesh” for their contribution to Bangladesh’s War of Liberation.

About repatriation of more than 1.1 million forcibly displaced Rohingyas, President Hamid said Bangladesh firmly believes that Nepal would continue to cooperate with Bangladesh in resolving this long-standing issue and put meaningful pressure on Myanmar so that Myanmar takes back its nationals in a speedy, safe, sustainable and dignified manner.

The relationship between the two countries would continue to grow from strength to strength in the days to come, President Hamid added.