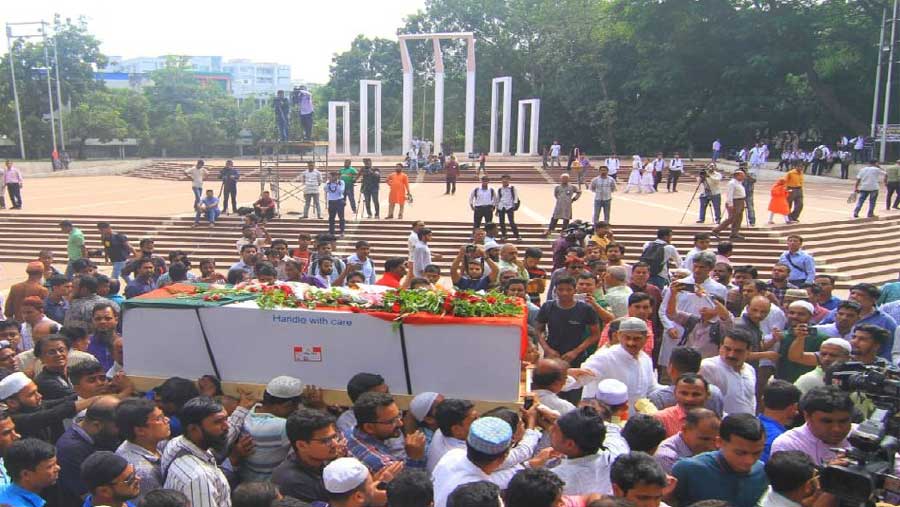 The mortal remains of the Bangladesh Nationalist Party Vice-Chairman was taken to the Shaheed Minar at 12:10 p.m. after a Namaz-e-Janaza at the south plaza of Parliament. It was kept there until 12:55 p.m. before being taken to the BNP’s Nayapaltan headquarters.

Current and former MPs, leaders of different political parties and people from all walks of life took part in Khoka’s Namaz-e-Janaza at the South Plaza of National Parliament held around 11:25 a.m., local media reported.

The valiant freedom fighter, who had long been suffering from cancer, died at the Memorial Sloan Kettering Cancer Center in New York on Monday.

Khoka’s body was brought back home in the morning. BNP standing committee members Mirza Abbas and Iqbal Hasan Mahmud Tuku received the body at the airport on behalf of the party.

As per his last wish, the BNP leader is scheduled to be buried at Jurain Graveyard beside the grave of his mother in the evening.

Before the burial, more janazas – one in front of BNP central office after Zohr prayers, another at Nagar Bhaban and yet another at Dhupkhola field after Asr prayers – will be held in the capital.

After his Janza at Nagar Bhaban, Khoka’s body will be taken to his Gopibagh residence.