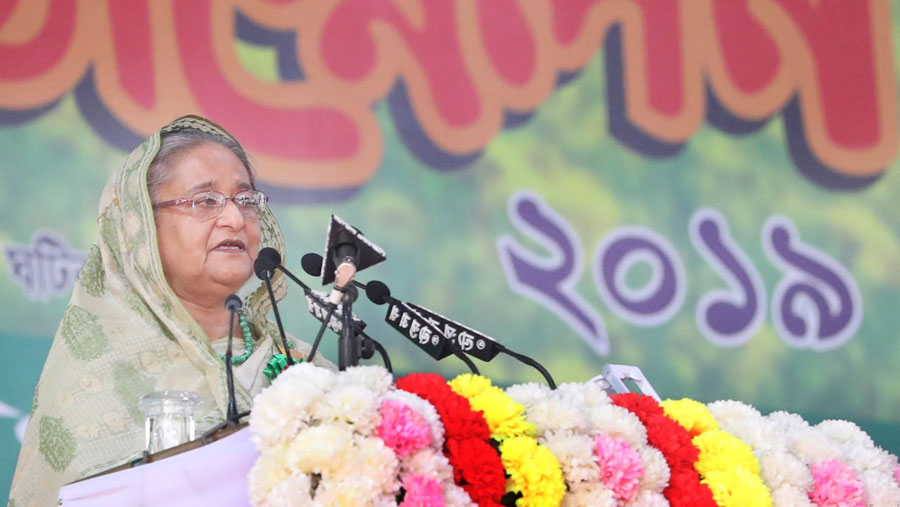 Noting that Bangladesh will go for industrilisation without bypassing the agriculture as the country’s development is largely depended on it, Prime Minister Sheikh Hasina reiterated her stance on not allowing industries on arable lands.

“We will definitely go for industrilisation for country’s development, but not bypassing the agriculture as the development is largely depended on agriculture. Therefore, no more industries will be allowed on arable lands particularly in triple-cropped ones,” she said.

She was inaugurating the 10th national council of Bangladesh Krishak League, an associate body of the ruling Bangladesh Awami League, at the historic Suhrawardy Udyan in Dhaka on Wednesday (Nov 6), local media reported.

The premier added: “We are currently setting up 100 special economic zones across the country. If anyone wants to build industry he/she will be given plot in the zones with every necessary service.”

“We are going to stop building industries here and there as we would have to save arable land for the sake of ensuring food security for the 16 crore people. The demand for foods never ends rather increases with soaring up the population,” she opined.

The premier simultaneously urged the educated people to engage themselves in agriculture leaving the mindset of being belittle in case of joining the agriculture as this sector is vital for the livelihood of a country and asked the Krishak League leaders and workers to do something to this end.

In this context, she said, “Bangladesh is a country largely depended on agriculture and the farmers are helping us to live by producing crops. So, never belittle the works of farmers and there is nothing to hesitate to do own works.

Awami League General Secretary and Road Transport and Bridges Minister Obaidul Quader spoke on the occasion as the special guest.

Earlier, the AL chief inaugurated the national council of the Bangladesh Krihak League by releasing pigeons and balloons.

A minute’s silence was observed to show respect to the memories of Father of the Nation Bangabandhu Sheikh Mujibur Rahman, four national leaders and martyrs of different movements, including the independence movement in 1971.

“We are providing every possible support, including incentive, giving importance to exportable agricultural products. A total of Taka 1,027 crore has been disbursed among the farmers as incentive,” she added.

Farmers are provided with cards through which they can purchase agriculture inputs such as fertilizer and seeds at lower prices, she said, adding that the government is giving the farmers 20 percent subsidy on electricity for cultivation.

Recalling the World Bank’s opposition to giving subsidy in agriculture, the premier said at that time she had questioned whether they could stop price supports given in agriculture in the USA and European countries.

In this context, Sheikh Hasina said, “Eighteen farmers were killed by then BNP government as they demanded fertilizer for cultivating land. After assuming power, we lowered fertilizer price four times to make it affordable to the farmers.”

She criticized the BNP for stopping giving the award introduced by Father of the Nation Bangabandhu Sheikh Mujibur Rahman for the farmers and researchers for their outstanding contributions to the development of agriculture, saying, “BNP had stopped giving the award likewise shutting the community centres.”

She also said, “BNP did not allocate a single penny in research in agriculture. We have given money for conducting research in this sector. As many as 584 high yielding crops have been invented along with innovating 442 techniques through research.”

“We have adopted National Agricultural Policy 2018 and have been working in accordance with the policy for the development of agriculture,” she said.

The premier urged all concerned to use modern technology in agriculture alongside introducing machines in this sector.

Now, farmers can open bank accounts with Taka 10 only, she said.

The premier said, “We are now a food surplus country due to the huge initiatives taken by our government for the development of agriculture following the footsteps of the Father of the Nation.”

Bangabandhu had wanted to change the fate of farmers, labourers, and the distressed people as they remained deprived for long, she said.

“I am now working with a target to make Bangladesh a developed and prosperous country free from hunger and poverty as dreamt by Father of the Nation Bangabandhu Sheikh Mujibur Rahman,” she said.

The premier called upon the leaders and workers of Bangladesh Krishak League to plant at least three saplings to protect the environment.

Sheikh Hasina also urged them to elect the future leadership of the Bangladesh Krishak League in unison.