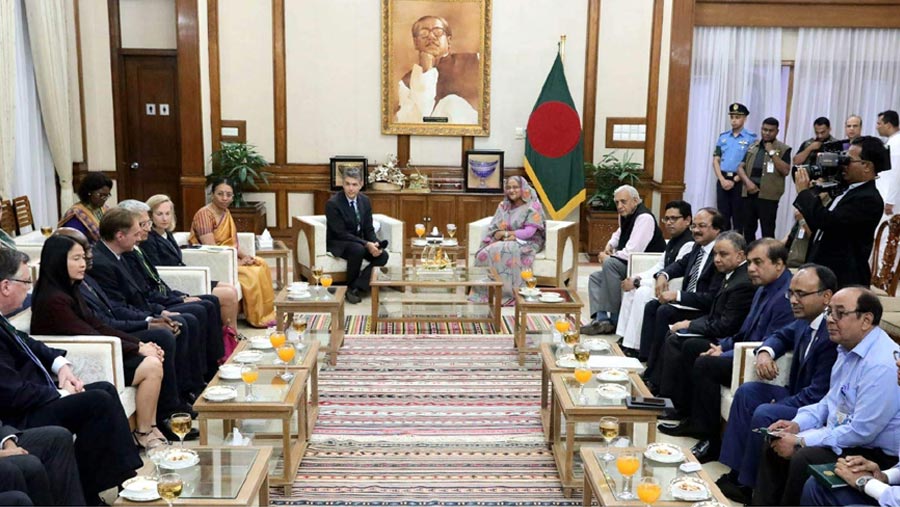 Noting that Bangladesh made incredible development in the last one decade, the visiting executive directors (EDs) of the World Bank Group said they will continue support for Bangladesh’s uplift.

“We witnessed ‘incredible development’ in Bangladesh and the country is much ahead in all social indices than other countries in South Asia,” said the EDs when they paid a courtesy call on Prime Minister Sheikh Hasina at her official Ganabhaban residence on Monday (Nov 4) evening. After the meeting, PM’s Press Secretary Ihsanul Karim briefed reporters, local media reported.

The World Bank Group executive directors praised the Bangladesh government for implementing its development policies properly as well as the projects funded by the leading lending agency. They also lauded the role of the premier and her government in flourishing the private sector, the press secretary said.

While talking about the Rohingya issue they said they are highly pleased to see that the local people of Cox’s Bazar opened the door to accommodate and help the forcibly displaced Rohingya nationals. In this connection, they informed Sheikh Hasina that they have visited Cox’s Bazar to see for themselves the condition of the Rohingyas.

They also said the World Bank will provide all sorts of support for the Rohingyas.

The PM said the policy of the government and Bangladesh Awami League is to ensure that rural people could enjoy the fruits of development. Sheikh Hasina mentioned that after coming to power, her government had decided to ensure food security, healthcare and development of communication and energy sectors. “That’s why we opened all these sectors to the private sector,” she said.

Spelling out the country’s development on various socioeconomic fronts, the prime minister said the poverty rate has come down to 21 percent from 82 percent since independence due to various pragmatic steps of the government.

She said that the dream of Father of the Nation Bangabandhu Sheikh Mujibur Rahman was the economic emancipation of the common people. “Bangabandhu had struggled throughout his whole life for establishing a hunger and poverty-free Golden Bangladesh,” she said. In this connection, Sheikh Hasina said her government is making efforts tirelessly to materialise the dream of the Father of the Nation.

“The goal of setting up the economic zones is for further industrialization and generating employment,” Sheikh Hasina said. She also briefly described various incentives for the local and foreign investors.

Sheikh Hasina said the government has set up climate resilience trust fund and taken massive programmes for afforestation to save the country from the impact of climate change.

Earlier, World Bank Executive Director Aparna Subramani called on the PM at the same place. Aparna Subramani, an Indian national, informed the prime minister that she visited some rural areas, digital centres in Bangladesh and witnessed the women empowerment in the country.

Talking about the bank interest rate, the prime minister said that the government has already instructed the banks to bring down the interest rate to a single digit.