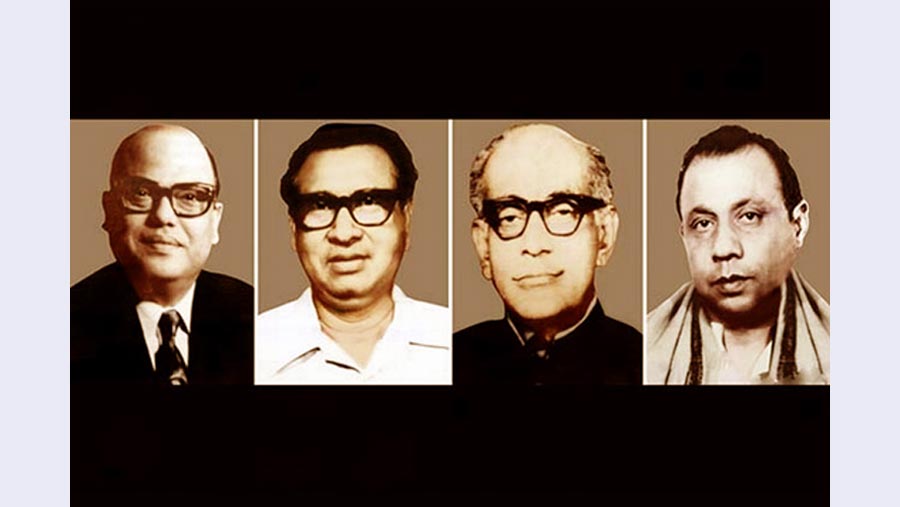 The nation on Sunday (Nov 3) paid glowing tributes to four slain national leaders, who were forerunners of the country’s independence, to recall the Jail Killing Day.

On this day in 1975, Syed Nazrul Islam, Tajuddin Ahmed, Captain M Mamnsur Ali and A H M Quamaruzzaman were killed by some disgruntled army officers inside Dhaka Central Jail following the brutal assassination of Father of the Nation Bangabandhu Sheikh Mujibur Rahman and most of his family in a military putsch on Aug 15 the same year.

The programmes of the day started with lowering of the national and party flags at Bangabandhu Bhaban and Bangladesh Awami League offices across the country at half mast, hoisting of black flags and wearing of black badges as a mark of respect to the martyrs of Nov 3, 1975.

In the morning, Prime Minister Sheikh Hasina paid homage to Father of the Nation Bangabandhu Sheikh Mujibur Rahman and four national leaders, marking the Jail Killing Day. In memory of the leaders, the premier placed wreaths at the portrait of Bangabandhu in front of Bangabandhu Memorial Museum on Dhanmondi Road No 32 in the city.

Sheikh Hasina first laid a wreath as the PM at the portrait of Bangabandhu in the morning. After placing the wreath, she stood in solemn silence there for some time as a mark of profound respect to the memories of the four national leaders.

Later, flanked by central leaders of the party, Sheikh Hasina placed another wreath as the president of Bangladesh Awami League at the portrait of Bangabandhu.

The Awami League leaders also placed wreaths at the graves of Aug 15 martyrs and the national leaders at Banani graveyard and offered fateha. A Milad Mehfil and special munajat were also held there. Similar programmes were observed at Kadirganj in Rajshahi where A H M Kamaruzzaman was laid to rest.

On the occasion of the Jail Killing Day, a Milad and Doa Mehfil was held at the Dhanmondi residence of Awami League presidium member and central 14-party alliance spokesman Mohammed Nasim after Maghrib prayers in the city seeking eternal peace of departed souls of four national leaders.

Besides, Bangabandhu Parishad organized a discussion meeting at the Abdus Salam Hall of National Press Club in the city with General Secretary Dr S A Malek in the chair. The discussion was addressed, among others, by, Science and Technology Minister Architect Yafes Osman.