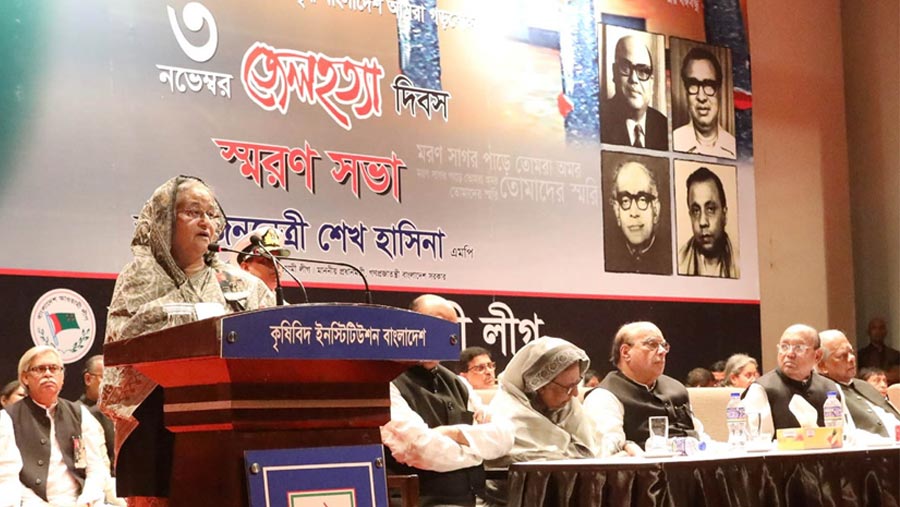 Accusing again the anti-liberation elements of their involvement in the killings of Bangabandhu and the four national leaders, Prime Minister Sheikh Hasina on Sunday (Nov 3) said there will be no room for the killers and their cohorts in the country.

“There will be no place for Rajakars, Al Badrs, Al Shams and the killers of Bangabandhu and the four national leaders and their cohorts on the soil of Bangladesh in future,” she told a discussion at Krishibid Institute, Bangladesh (KIB) Auditorium at Farmgate in the capital.

Calling upon the countrymen to stay alert to prevent the anti-liberation forces and the killers from returning to power, Sheikh Hasina, also the Awami League president, said, “We’ll never compromise with any sorts of injustice.”

The premier added: “We’ve been able to execute the verdict of capital punishment against the killers of the Father of the Nation, four national leaders and war criminals after holding their trials as the people voted us to power time and again.”

Sheikh Hasina said the government is currently collecting information of the fugitive killers of Bangabandhu and the four national leaders to bring them to justice.

“So, cohorts and patrons of the war criminals and killers (of Bangabandhu and four national leaders) will surely be brought to book one day,” she asserted.

The premier sounded a note of warning against any move to foil independence of the country which had been achieved by the sacrifice of millions of people.

At the outset of the discussion, a minute’s silence was observed in memory of the four national leaders — Tajuddin Ahmed, Syed Nazrul Islam, Captain Monsur Ali and AHM Kamaruzzaman — who were brutally killed inside the Dhaka Central Jail on Nov 3 in 1975.