Incentives in leather sector to continue for 5 more years 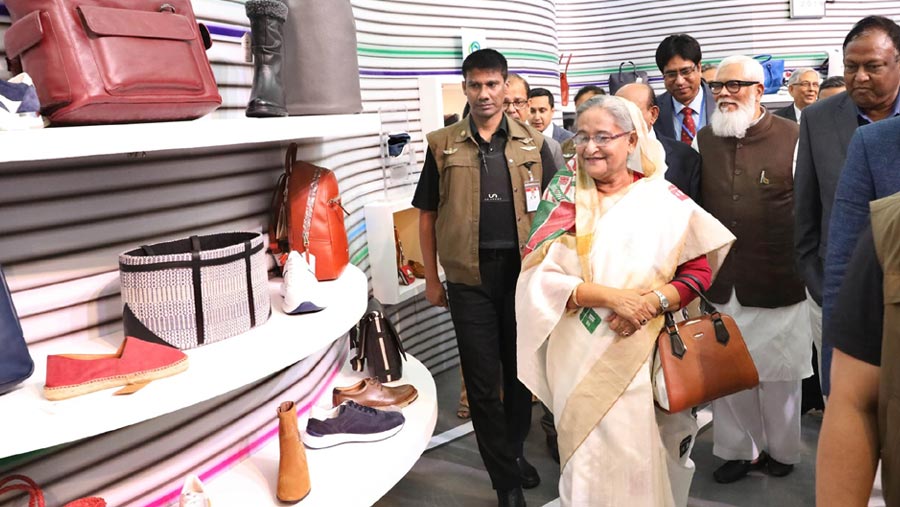 Prime Minister Sheikh Hasina on Wednesday (Oct 30) announced continuation of incentives in leather sector for at least five more years aimed at achieving the desired export target of the leather and footwear industry.

“The incentive in leather sector will be continued for at least five more years with a view to achieving the desired export target from the leather and footwear industry,” she said.

Noting that as part of export diversification, leather sector is being defined as the priority one in the economy and National Industrial Development Strategy, she said “Our government, in its last two tenures, has taken various initiatives such as giving policy support and incentives for development of the leather and footwear industry.”

“Due to the initiatives taken by our government, 82 percent of foreign currency is coming from export of leathergoods and footwear in leather sector while factories in this sector is mushrooming alongside increasing the interest of investing money to this end,” she continued.

She, however, mentioned that king share of foreign currency would come from export of leathers as raw material a decade ago.

The premier hoped that the country will definitely achieve the target of earning foreign currency of US $ 5 billion by 2022 from export of leather goods, which is now $ 1.2 billion.

“If we can export our entire raw leather products by making those finished ones, we will be able to easily earn US $ 5 billion foreign currency from this sector by 2022,” she added.

The Ministry of Commerce and the Leathergoods and Footwear Manufacturers and Exporters Association of Bangladesh (LFMEAB) have jointly organised the event to attract more investment in the leather sector.

An interactive audio-video presentation on various sides of the past, present and the future of Bangladesh’s leather sector was screened at the function.

Stating that the leather goods and footwear industry has become the second largest export earning sector in the last decade surpassing jute and jute products’ export earnings, Sheikh Hasina said “This sector attained second position in the volume of export earning only after the readymade garments.”

In this regard, she said “Bangladesh offers cheapest labour facilities and proper training is also being given to them”.

She said the move was taken to boost local and foreign investment in the leather sector and make it sustainable.

Stressing the need for bringing diversification in leather goods to increase export, Sheikh Hasina said the entrepreneurs will have to develop new products and explore new export markets.

In this regard, she assured them of providing necessary assistance from the government.

The premier said an environment-friendly leather industrial estate has been set up in Savar for flourishing the leather sector.

Praising the organizers for arranging the show for the third time in the country, the PM said it would attract more foreign investment in Bangladesh’s leather footwear and leather goods industry sector as well as create huge enthusiasm among the investors.

“It will also help the entrepreneurs around the world know about the government’s policy assistance and patronization alongside project quality and standard of Bangladeshi leather goods and footwear products before the world community,” she said.

Mentioning that her government has relocated the tannery industries in Savar from Hazaribagh, Sheikh Hasina said “There will have allocation of at least 150 acres of land in the extended project of Leather Industry City in Savar for setting up composite leather products and footwear factories by following international standards and Leather Working Group (LWG) certification.”

She however said equal opportunities and policy supports will be ensured for all export sectors as all discriminatory barriers will be removed.

The premier said over the last 10 years, Bangladesh economy has progressed. “We have established a smooth communication network with neighboring countries where we can find huge markets of our products,” she said.

One hundred Special Economic Zones are being established to attract local and foreign investment and 12 of those have already been completed, she said.

“Once the economic zones are completed, huge local and foreign investment will be attracted,” she opined.

The PM went on saying that the government has made constant stride for country’s industrial development as well as encouraging agriculture.

Laying importance on enlarging the country’s export basket, the premier said the government is giving incentives to many sectors to boost export.

She urged the LFMEAB leaders to join hand with the government to achieve its goal in building Bangladesh as a middle-income country by 2021 and a developed one by 2041.

Spelling out basic achievements of her government in the last 11 years, the premier said the world now considers Bangladesh as development miracle.

Referring to the latest GDP ranking of the IMF, she said “Bangladesh is the 29th largest economic country in the world in terms of PPP.”

Bangladesh ranked the highest growth nation among the countries of Asia and the Pacific according to the latest figures from the Asian Development Bank, she informed.