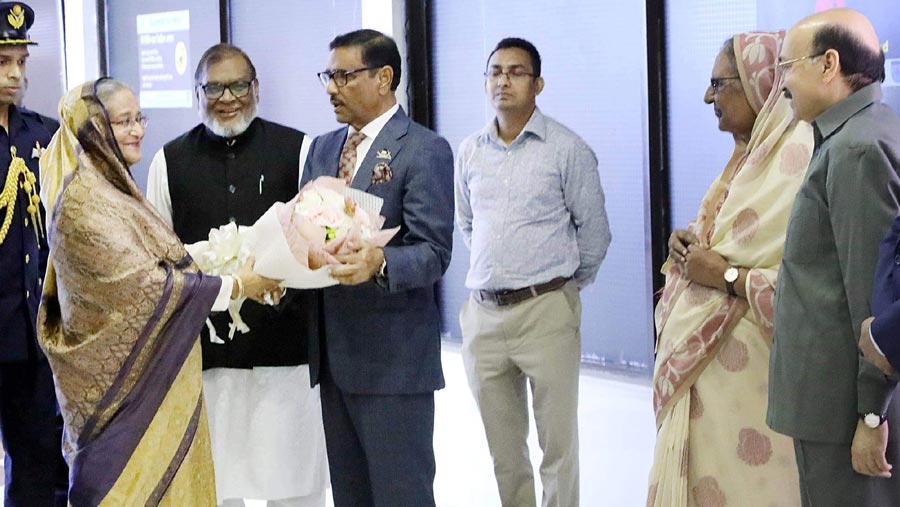 Minister for Education of the Republic of Azerbaijan Jeyhun Aziz Oglu Bayramov and Bangladesh Ambassador to Turkey M. Allama Siddiki, who is concurrently accredited to Azerbaijan, saw the prime minister off at the airport.

The two-day summit of the NAM, a forum of 120 developing countries, ended on Oct 26 at Baku Congress Centre in the Azerbaijan capital of Baku.

Sheikh Hasina joined the summit along with other heads of states and governments of the member states of the NAM.

On Friday, the PM joined the plenary session of the 18th NAM Summit and took part in a discussion titled “Upholding the Bandung Principles to ensure concerted and adequate response to the challenges of contemporary world” at Baku Congress Centre.

Speaking on the occasion, she said, “We’re currently hosting over 1.1 million Rohingyas. It has the potential to destabilise our country and beyond. We’re constrained to seek support of the international community in resolving the crisis. Voluntary return of the Rohingyas to their homes in the Rakhine State in safety, security and dignity is the only solution to the crisis.”

Along with other NAM leaders, the Bangladesh PM attended the opening ceremony of the summit at the Plenary Hall of Baku Congress Centre.

Afterward, Sheikh Hasina joined Working Luncheon for heads of delegation at the Luncheon Hall of the centre and the Plenary Session.

In the evening, the prime minister attended the official reception hosted by Azerbaijan President Ilham Aliyev at Heydar Aliyev Center.

On Saturday, Sheikh Hasina joined the Plenary Session, the Working Luncheon for the heads of delegation and the Closing Ceremony of the summit.

She attended a dinner hosted at Hilton Baku by the Bangladesh Ambassador to Turkey who is concurrently accredited to Azerbaijan.

The premier left Dhaka for Baku on Thursday.