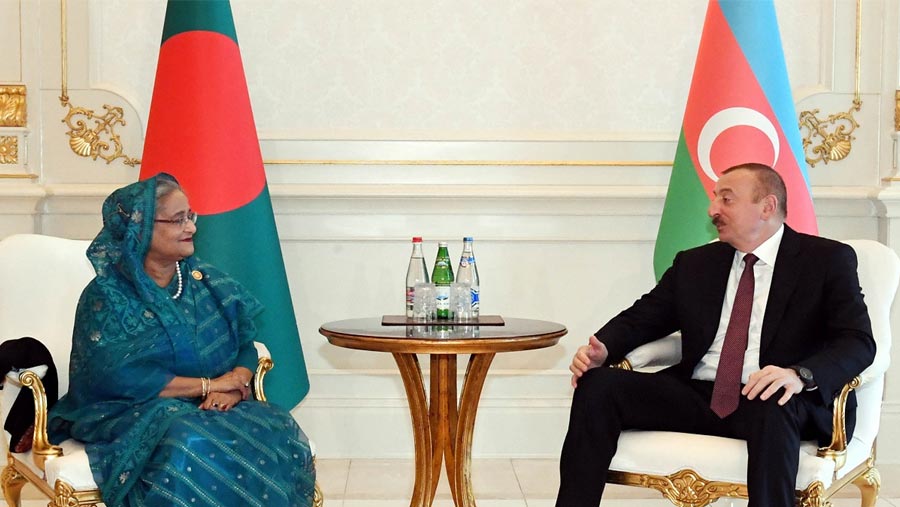 “The two leaders agreed to deepen bilateral ties in various fields between Bangladesh and Azerbaijan,” Bangladesh Ambassador to Turkey M Allama Siddiki, who is concurrently accredited to Azerbaijan, told reporters after the meeting at Presidential Palace.

During the over half an hour meeting, he said, the two leaders discussed the historical and cultural ties between Bangladesh and Azerbaijan.

“This was the highest level meeting between the two countries,” the ambassador said.

The PM recalled with profound respect the support of Azerbaijan as part of the then Soviet Union to Bangladesh’s Liberation War in 1971.

The Azerbaijan President remembered Bangladesh’s support to his country as a new state in 1992.

Sheikh Hasina thanked Azerbaijan for extending its moral and physical support to Bangladesh on Rohingya issue. The two leaders expressed hope the field of exporting Bangladeshi manpower to Azerbaijan will be further expanded.

The PM highlighted Bangladesh’s tremendous success in the agriculture sector.

Aliyev highly appreciated Bangladesh’s success in different sectors under the leadership of Prime Minister Sheikh Hasina and astonished how the government is ensuring food for the huge population.

The PM invited Azerbaijan president to visit Bangladesh which he cordially accepted. The PM mentioned opening an office of Bangladesh in Azerbaijan in future.

The PM is now in Azerbaijan to attend the 18th NAM Summit.