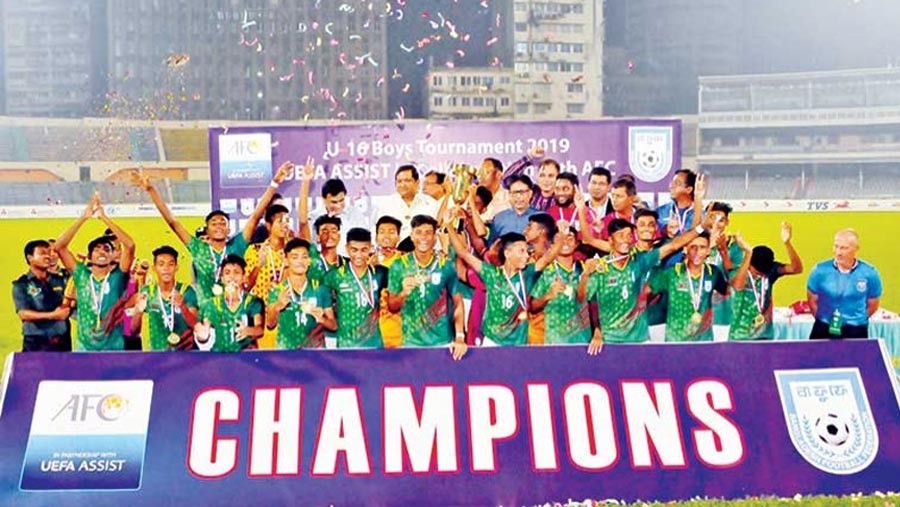 Moinul Islam Moin’s hat-trick helped Bangladesh win the crown in the UEFA Assist Under-16 Development Tournament as they beat Maldives by 6-0 in the last match of the league-basis event at the Bangabandhu National Stadium on Sunday (Oct 20).

Moinul scored in the 37th, 52nd and 83rd minutes while Emon Islam Babu, Apurbo Mali and Saidul Islam Sumon scored one goal each in the seventh, 13th and 14th minutes respectively.

The Bangladesh boys maintained all-win record in the four-team tournament and collected nine points from three games as they defeated Cambodia and Faroe Islands by 2-0 and 3-1 before Maldives rout.

Earlier, in the day’s another match at the same venue, Faroe Islands substitute defender Johann Jekladal Hejbro scored a brace for 2-0 win against Cambodia.

Johann, who replaced Rani Wenningsted in the 58th minute, scored in the 80th minute for 1-0 lead before made it 2-0 in the stoppage time of the second half.

Bangladesh clinch the title in their second attempt in this tournament after finishing third in the last edition in 2018 in Thailand when they defeated the Maldives 10-0, played 1-1 against Thailand and conceded 0-4 loss against Cyprus.