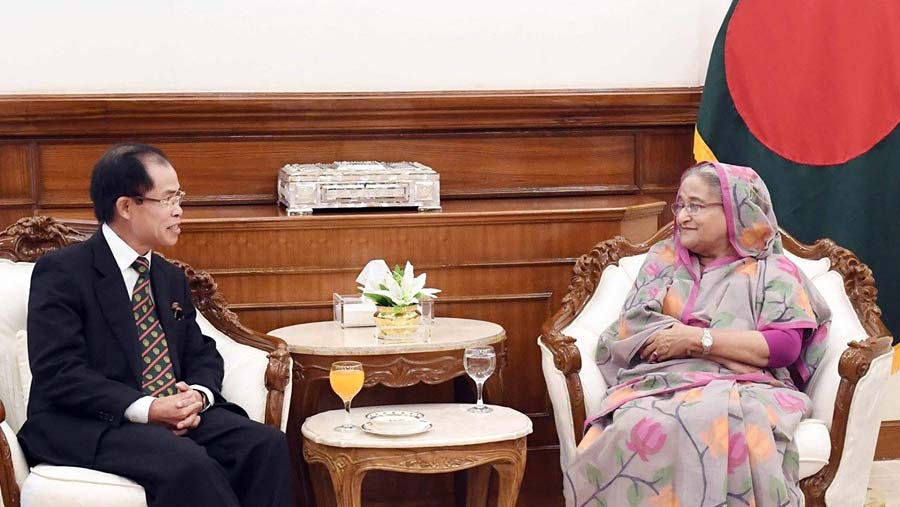 Prime Minister Sheikh Hasina on Sunday (Oct 20) put emphasis on boosting trade and commerce between Bangladesh and Vietnam for mutual benefits of the two countries.

“The Southeast Asia has a huge population and we can enhance our trade and commerce by utilising this advantage,” she said.

The PM expressed this view when outgoing Vietnamese Ambassador in Dhaka Tran Van Khoa paid a call on her at her office in Dhaka in the morning. After the meeting, PM’s Press Secretary Ihsanul Karim briefed media.

Sheikh Hasina said Vietnam has special place in the hearts of Bangladeshis and both the nations struggled for their independence.

“The people of Bangladesh always extended support to the liberation war of Vietnam,” she said.

The PM recalled that a youth delegation from Bangladesh visited Vietnam after independence. “Sheikh Kamal, the eldest son of the Father of the Nation, was included in the team,” she said.

The PM conveyed her regards to the Vietnamese premier through the ambassador. Sheikh Hasina also remembered her visit to Vietnam in 2012.

The Vietnamese ambassador laid emphasis on bolstering cooperation in the fields of trade, tourism and people-to-people contact between the two countries.

“We can learn from each other in this regard,” he said.

Tran Van Khoa mentioned that the existing annual trade volume between the two countries is 800 to 900 million US dollar. “We want to take the amount to one billion dollars,” he said.

Highly appreciating Bangladesh’s tremendous development under the leadership of PM Sheikh Hasina, the ambassador said he observed this impressive uplift during his three-year stay in Bangladesh.

“Bangladesh has made its strong position in the international arena due to this development,” he said.

Referring to the existing bilateral ties between the two countries, Tran Van Khoa said Vietnam attaches highest priority to its relations with Bangladesh.

Both the PM and ambassador expressed the hope that the relations would be deepened further in the days to come.

Secretary to the Prime Minister’s Office Sajjadul Hassan was present at the meeting.