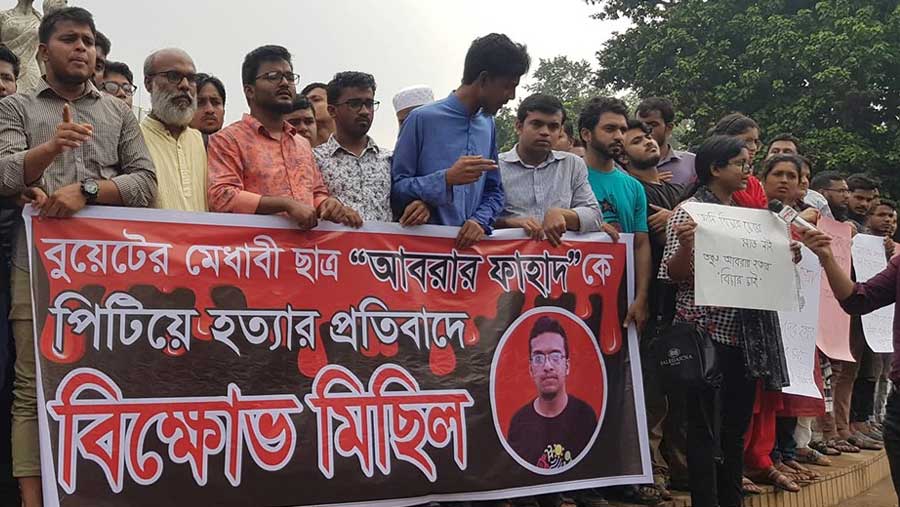 Students across Bangladesh are protesting after an undergraduate was beaten to death at one of the country's most prestigious universities. The body of Abrar Fahad, 21, was found in a dormitory days after he posted comments "criticising the government."

Several members of the student wing of the governing Bangladesh Awami League have been detained in connection with the death.

The killing has shocked Bangladesh and shone a light on the culture of violence in public universities.

The Bangladesh Chhatra League (BCL), the student wing of the Awami League, has been widely accused of using torture and extortion against students.

The government has promised to bring those responsible for Abrar Fahad's death to justice.

His body was found on Sunday (Oct 6) at the Bangladesh University of Engineering and Technology (BUET) in Dhaka.

On Monday, students in Dhaka and other cities staged street protests, chanting slogans and blocking roads. Protests continued on Tuesday with students at BUET demanding the death penalty for those found guilty of the killing.

Former students and members of the teaching staff also joined the demonstration on the BUET campus.

A police spokesman said that, after examining CCTV footage, investigators detained nine men from Abrar Fahad's dormitory. By Tuesday the number of arrests had risen to 13, police said, all from BUET. Six more suspects are being sought.

Dhaka deputy police commissioner Muntasirul Islam confirmed to AFP news agency that the student had been beaten to death.