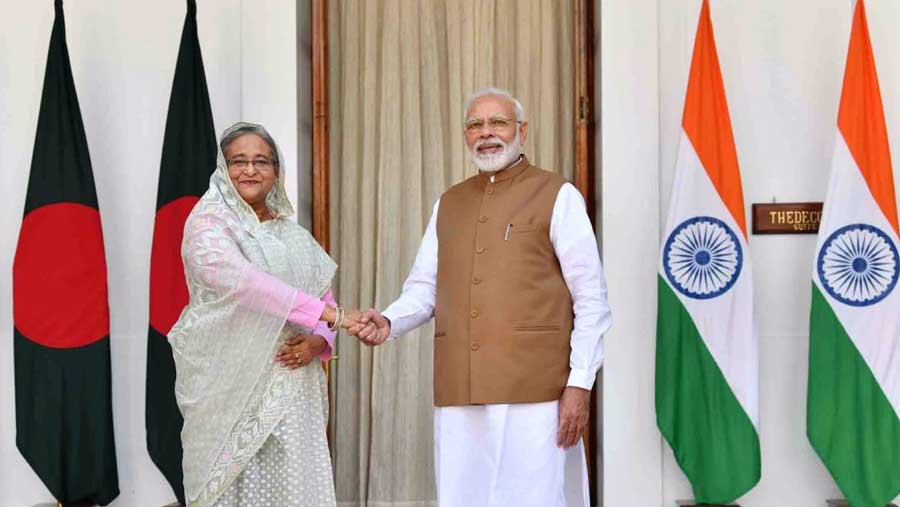 Bangladesh and India on Saturday (Oct 5) signed seven bilateral documents, aiming to take the relations between the two countries to the next trajectory.

The documents were signed, exchanged, adopted and handed over after a bilateral meeting between Prime Minister Sheikh Hasina and her Indian counterpart Narendra Modi at Hyderabad House in New Delhi.

The two leaders witnessed the signing and exchange of the documents – six new and another renewal.

The bilateral documents are MoU for providing a Costal Surveillance System, the Standard Operating Procedure (SOP) on the use of Chattogram and Mongla ports for the movement of goods to and from India, MoU on withdrawal of 1.82 cusec of water from the Feni River by India for drinking water supply scheme for Sabroom town, Tripura, agreement over implementation of the Lines of Credit (LoCs) committed by India to Bangladesh, MoU between the University of Hyderabad and the University of Dhaka, renewal of a cultural exchange programme and MoU on cooperation in Youth Affairs.

Prime Minister Hasina said Bangladesh’s bilateral relationship with India is considered as good-neighbourly one among the international community due to multifaceted and multidimensional cooperation. “This cooperation, I firmly believe, will continue in the future.”

She said the cooperation between the two countries in traditional sectors has significantly enhanced over the past decade.

The PM said the two countries also extended their helping hands in the areas of blue economy and maritime affairs, peaceful use of nuclear power, space research, internet bandwidth export and cyber security.

Hasina said the relations between the two countries began in 1971 when people from all walks of life joined in the war of Liberation led by father of the Nation Bangabandhu Sheikh Mujibur Rahman.

She said Bangladesh gratefully remembers the immense contribution of the people of India and the government during the War of Liberation in 1971 which will remain a milestone always in Bangladesh-India bilateral relations.

Earlier, a tete-a-tete was held between the two leaders just before the meeting.

The two leaders met for the second time in 10 days exemplifying the strength of Bangladesh-India ties, said the Indian Ministry of External Affairs adding that the relationship is setting the “template” for bilateral cooperation.

The bilateral meeting between Hasina and Modi was followed by lunch at the Hyderabad House.

Earlier in the morning, Indian External Affairs Minister Dr S Jaishankar had a “warm conversation” with PM Sheikh Hasina and reaffirmed India’s “highest priority” to her relations with Bangladesh.

Welcoming PM Sheikh Hasina in New Delhi, India on Thursday described its relations with Bangladesh as a “relationship of utmost priority”.

“A relationship of utmost priority,” Indian Ministry of External Affairs (MEA) tweeted sharing the photos of Prime Minister Sheikh Hasina’s arrival in New Delhi as part of her official visit.

Sheikh Hasina is scheduled to return home on Sunday (Oct 6).