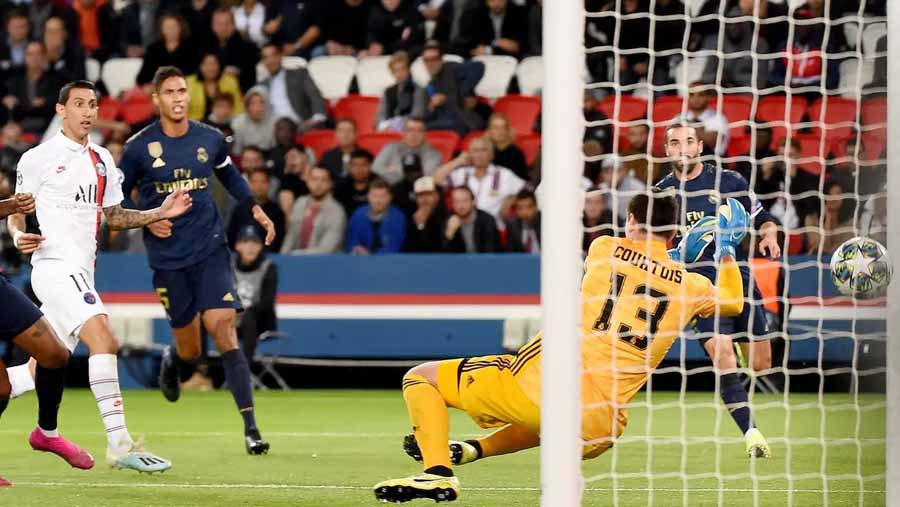 Angel Di Maria was hailed as “exceptional” after scoring twice against his former club as Paris Saint-Germain shrugged off the absences of Neymar and Kylian Mbappe and thrashed Real Madrid 3-0 on Wednesday (Sep 18) to get off to the perfect start in the Champions League.

Angel Di Maria struck twice to lead Paris Saint-Germain to a 3-0 victory over Real Madrid to hand the French giants an early advantage in Champions League Group A.

Real fans may have hoped that the return of Zinedine Zidane - who won this competition three years in a row during his first spell in the Bernabeu dugout - would inspire Los Blancos in Paris, but Real simply did not turn up at Parc des Princes.

Di Maria opened the scoring after 14 minutes with a well-taken effort at the near post, though Thibaut Courtois will feel he could have done better with the ball relatively close to him.

However, there was nothing the Real goalkeeper could do about the second as Di Maria clinically finished from outside the box after being teed up by former Everton midfielder Idrissa Gueye.

Eden Hazard had little impact on his full debut for Real, while Keylor Navas - lining up against his former club - was beaten with 13 minutes left, but Karim Benzema's effort was ruled out for a Lucas Vazquez offside during the build-up.

And PSG piled on the misery late on as Thomas Meunier struck an injury-time goal to add gloss for Thomas Tuchel's team.

While the defeat is by no means a hammer-blow for Real Madrid's hopes of qualifying for the knockout stages, the result against a PSG team lacking both Kylian Mbappe and Neymar lays bare the scale of the task facing Zidane if he is to add to the three European Cup triumphs during his first spell as Real coach.

“We can’t be too surprised because he has been showing for more than a year now that he is capable of performances like that,” said PSG coach Thomas Tuchel.

“He was exceptional tonight.”