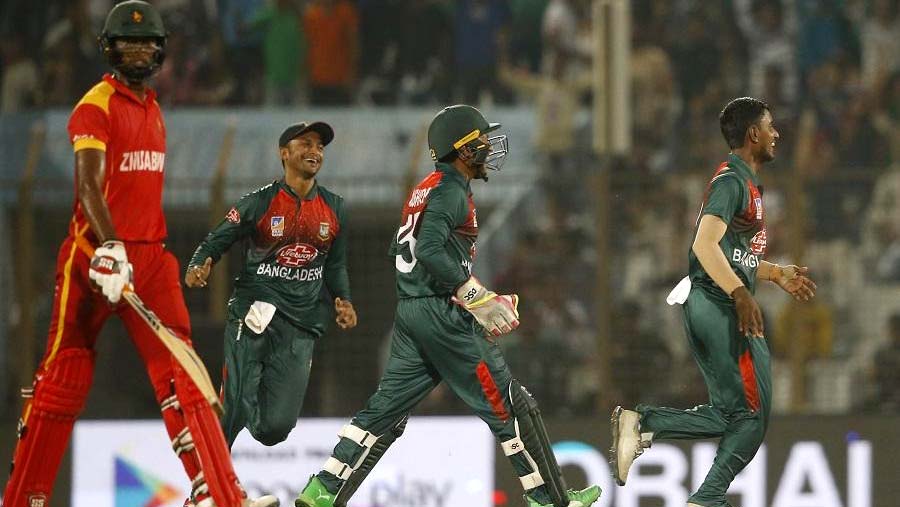 Mahmudullah Riyad smashed an incredible 41 ball-62 while pacer Shafiul Islam marked his return to T20 cricket after two years with career best 3-36 as Bangladesh confirmed the Tri-nation T20 series final with a facile 39-run victory over Zimbabwe at the Zahur Ahmed Chowdhury Stadium on Wednesday (Sep 18).

With one match to play in the league phase, Bangladesh reached the final of the ongoing Tri-nation T20I series beating Zimbabwe by 39 runs at Zahur Ahmed Chowdhury Stadium in Chattogram on Wednesday (Sep 18).

The final will take place at Sher-e-Bangla National Cricket Stadium in the capital on Sep 24.

Mahmudullah Riyad struck 62 off 41 to propel the Tigers to 175 for five in 20 overs after losing the toss and batting first. In reply, Zimbabwe tumbled for 136 all-out in 20 overs as debutant Aminul Islam Biplob, Mustafizur Rahman and Shafiul Islam bagged two wickets each.

Zimbabwe lost the first wicket before putting anything on the board as Mohammad Saifuddin forced Brendon Taylor to play a lofted drive and Shakib picked it up at the mid-off area.

In the second over, Shakib brought himself up to bowl and bagged a wicket in his first over. Regis Chakabva stepped up and tried to hit a maximum but missed the ball which shattered his stumps.

Shakib passed the ball to Shafiul, who came back to T20I team after two years, in the fourth over and Shafiul did not disappoint his captain taking a wicket off the first delivery. Sean Williams went to pull it away but managed only a top-edge. Afif Hossain took a regulation catch to remove him.

At the end of 10th over, Zimbabwe were 56 for six, meaning they were out of the race to seal this game right after batting the half of the overs.

Along the way, Shakib inducted Aminul, the debutant leg-spinner, in the seventh over, and the 19-year-old lad took a wicket in his third delivery. The ball tossed up nicely outside off and Tinotenda Mutombodzi hit well through the long but fell a little bit short as Najmul Hossain Shanto, another debutant, took a good catch. Aminul ended up taking two wickets conceding 18 runs in four overs.

Eventually, Zimbabwe were wrapped up by Bangladesh bowlers for 136 in 20 overs. Richmond Mutambami hit 54 off 32 but it was not enough for Zimbabwe to keep their hope for the final alive.

In the end, Mahmudullah was awarded man of the match for his match-winning knock of 62.

Earlier, the Tigers posted their highest-ever T20I total against Zimbabwe --175 -- for five in 20 overs.

Mahmudullah quick-fired 62 runs off 41 balls featuring one four and five big sixes to help the Tigers put up a challenging total.

Bangladesh added 55 in the powerplay losing the wickets of Liton Das and debutant Najmul Hossain Shanto.

Shanto was the first man to get dismissed for 11 off 9. He was removed by Kayle Jarvis as he took a return catch off his own ball. In the next over of Chris Mpofu, Bangladesh lost Liton Das who hit three consecutive boundaries (two sixes and one four) in the third over of the innings off Ainsley Ndlovu.

Liton went to clear Mpofu through the leg side, but he skied the ball and Neville Madziva picked up a high-catch to remove him. Liton added 38 off 22 with four fours and two sixes.

After losing two wickets in quick succession, the onus was on Shakib Al Hasan and Mushfiqur Rahim to make a big partnership. But it was Shakib who fell for 10 off nine and Bangladesh suddenly found them struggling in the middle.

Ryan Burl came to bowl the eighth over and picked the wicket of Shakib as Sean Williams took an easy catch at the mid-on. However, right after Shakib’s dismissal, Mahmudullah came to bat and hit a first-ball six off Burl.

While going to 15th from 7th, Bangladesh added 79 runs with the help of the fourth wicket stand shared between Mushfiqur and Mahmudullah.

The partnership ended in 17th over when Tinotenda Mutombodzi removed Mushfqur for 32 off 26 balls with three fours and one six. Tinotenda got a little bit of extra bounce that worked right for him.

Before falling apart, Mushifqur accompanied Mahmudullah in the fourth wicket to add 78 runs off 67 balls.

Mahmudullah fell for 62 off 41 with one four and five sixes in the last over off Jarvis. In the very next ball, Mosaddek Hossain failed to play a full-toss properly and skied ball which was taken safely by Regis Chakabva at deep.

Along the way, Mahmudullah completed 8000 runs in the international cricket as the third Bangladesh batsman after Tamim Iqbal, Shakib and Mushfiqur Rahim.

Eventually, Bangladesh ended on 175 for seven in 20 overs, which is now their highest T20Is total against Zimbabwe. The previous highest was 168 for seven back in 2013 at Bulawayo.

Bangladesh made three changes in the best eleven as Soumya Sarkar, Taijul Islam and Sabbir Rahman were overlooked to pave the way for Najmul Hossain Shanto, Shafiul and Aminul.

Shafiul made a comeback to the T20I XI after a break of two years, Shanto and Aminul got the T20Is cap for the first time.

Shanto played Tests and ODIs before along with 35 First-class, 92 List-A and 40 Twenty20s, Aminul played just 19 List-A and two Twenty20 games. Although a lower-order batsman, he is also known for his leg-spinning ability.

The Tigers will play Afghanistan in their next game on Sep 21 at Chattogram while Zimbabwe will take on Afghans on Sep 19.