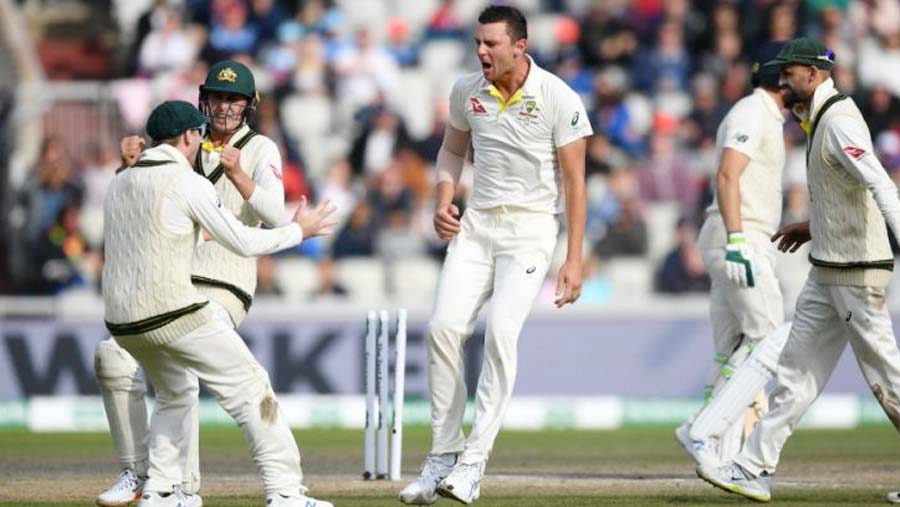 Pat Cummins led the way before Josh Hazlewood struck as Australia retained the Ashes with a 185-run win over England in the fourth Test at Old Trafford on Sunday (Sep 8). England, set a huge target of 383 to win, were bowled out for 197 following some spirited lower-order defiance. Cummins, the world's top-ranked Test bowler, took 4-43 in 24 overs.

Australia finally broke England's brave resistance to retain the Ashes with a 185-run victory in the fourth Test at Old Trafford.

There was hope that England could pull off one more stunning achievement in a summer of astonishing moments, only for it to be sucked away when Leach turned the leg-spin of Marnus Labuschagne to short leg.

Overton was lbw to Josh Hazlewood with 13.3 of the day's 98 overs remaining, sparking Australian jubilation.

England began on 18-2, chasing 383, but more realistically looking to bat through the day and set up a series decider at The Oval.

Joe Denly made 53, while Jason Roy, Jonny Bairstow and Jos Buttler showed defiance and the big-hearted Overton spent 105 balls at the crease.

But the relentless Australia attack was simply too much to hold back as pace bowler Pat Cummins ended with 4-43.

It means Australia will leave the U.K. with the urn for the first time since 2001, while England will not add the Ashes to the World Cup they won in July.

England must now win the final Test if they are to avoid suffering their first home series defeat against any side since 2014.